Review: "A Funny Thing Happened on the Way to Her Brother's Shotgun Wedding" by Noreen Riley 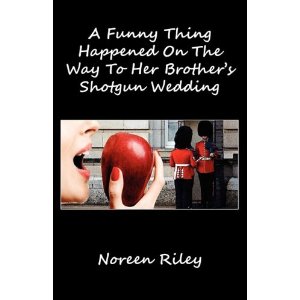 Evie Dunleavy is very surprised when her brother Michael calls to say that he is getting married....and that his bride-to-be is pregnant. Michael lives in London, while the family remains in the United States, so nobody has even met the bride! Michael convinces Evie, who is at a loose end at the moment anyways, to move to London on his dime and help his bride-to-be plan the wedding while getting to know her a bit before the wedding. Without any better offers on the horizon Evie accepts, packs everything up, and heads off for an adventure.

Luckily for Evie Michael's apartment is too small for an extended house guest so he sets her up in his friend Nate's apartment. Nate is delicious to behold and charming to boot so Evie knows that she will have no problem staying with him for the next couple of months. She may just have a problem keeping her hands off of him, though, despite Michael's rule that his friends are not permitted to date his little sister.

Despite the long title, A Funny Thing Happened... is a fast and fun journey into the world of chick lit that takes place across the pond. It's filled with lots of laugh-out-loud moments, a heroine who is far from perfect, and a cast of lovable supporting characters. I especially loved the bride-to-be, Charlotte, who is well-bred, sweet, and accepting of Evie despite her downfalls. I've planned a wedding myself (although thankfully I was not pregnant at the time) and I can't imagine being as calm and collected as Charlotte was despite all of the things that inevitably went wrong.

If you're looking for a light read after a long day, and you're willing to overlook the occasional spelling and grammatical errors, A Funny Thing Happened.... is an excellent choice. I would certainly be excited to read another book about the charming and flawed Evie Dunleavy if Noreen Riley decided to write a sequel.
Posted by The Book Chick at 5:48 PM