"The Royal We" by Heather Cocks and Jessica Morgan 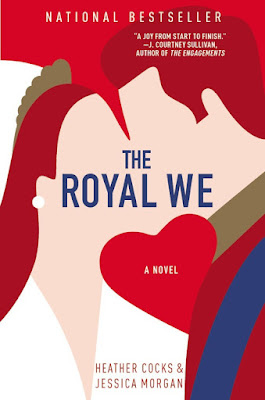 American Rebecca "Bex" Porter is doing something that she's never done before- she is separating from twin sister Lacey to go to school overseas, at Oxford. She has barely arrived there and already she finds herself in the presence of Prince Nicholas, Great Britain's future king and one of Bex's housemates. Although she doesn't mean to (it's her sister Lacey who is into the fairy tales), Bex finds herself falling in love with Nick.

Although their unsuitable relationship needs to be kept out of the public eye for as long as possible, Bex finds herself attending glitzy society parties and enjoying many of the things that are available to royals that are not available to the ordinary public. However she also begins to experience the other side of being famous, such as the crushing pressure on the royal family that comes from being in the pubic eye all of the time, the lies of the money-hungry paparazzi, and their bizarre private lives that the royal family will do anything to hide.

When Bex's twin Lacey decides to move to Britain and ends up getting in trouble along with Nicholas' troublesome younger brother Freddie, things become even more complicated. Things come to a head and Bex must decide if she will be able to cut it as Great Britain's future queen.

I thoroughly enjoyed The Royal We. Granted, it is very obviously thinly veiled Prince William and Kate Middleton fan fiction, but that was okay with me. It was still a fun and fantastic ride, and even a re-imagining of the early days of their relationship, before people figured out that Kate Middleton was destined to be the future queen of England. I found the whole story incredibly charming, and I couldn't help but be swept away by their sweet (if complicated) romance.

The characters definitely enhanced this story. There were Bex and Nick themselves- Nick was always very sweet and thoughtful and Bex attempted to maintain her status as an independent woman despite pressures to the contrary. I had mixed feelings about Lacey as she seemed selfish and spoiled for most of the book, and I loved Freddie who was charming and fun and had more depth than anyone gave him credit for. What was extraordinary was how the authors created a solid group of friends for Nick and Bex and how they played such a key role in the story without ever completely taking it over. Perhaps that is why this book comes across as engaging as it did.

If you are looking for a story that is fun and entertaining and that will give you a fun peek into the lives of royals, The Royal We is it. It's perfect to slip into the beach bag this summer- I found that once I picked it up I was hooked! My thanks to the publisher and Netgalley for providing me with a review copy.
Posted by The Book Chick at 10:42 AM