"Love Is Pink!" by Roxann Hill 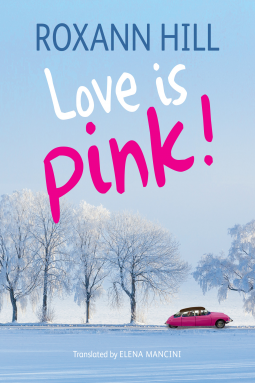 Michelle thinks that she has it all- money, good looks, charm, designer clothing and an apartment to die for! She also has her rich, successful dream man, Valentin, but there's one catch. He's married, and its not to her.

The plan is that Valentin will leave his wife over Christmas and publicly declare his love for Michelle, but it is no surprise to anyone but Michelle when he chooses to stay with his wealthy wife and Michelle finds herself stranded in the French Alps with no way home. Hitching a ride back to Berlin with penniless stranger David and his precocious daughter Emma in their rickety old car, Michelle finds herself re-examining the life that she has created for herself and wondering if she is truly happy or if she's been pretending all along.

I'm really torn about what to say about Love Is Pink!. I almost didn't finish reading it. I was half way through and I just about put it aside for good. I wanted to like it! I liked the plot very much. It reminded me of JoJo Moyes' One Plus One, which I absolutely loved. The writing was pretty good too. The book was translated so at times the wording was a bit choppy but it was always grammatically correct. The problem that I had was with the main character, Michelle. She was rude, abrasive, snotty, and her sense of entitlement was off the charts. It was unbearable! She had no problem stealing a married man away from his wife, she was incredibly rude to the people around her who she deemed to be "beneath" than her and then, when a complete stranger offers to drive her all the way to Berlin, she is beyond condescending to him because she believes that he has no money. Truthfully, David (a kind and patient man) and his daughter Emma deserved far better than to be stuck inside a car with her for three days.

Granted, I did continue reading, and Love Is Pink! did get better. Michelle (predictably) begins to change and to realize that a person's worth does not correlate directly to his or her bank account. There was a scene that takes place in a castle that I absolutely loved and I wished that I could actually be there myself! The conclusion was decent and there is a really cute scene between David and Michelle at the end that made me laugh. Unfortunately it just wasn't enough to completely redeem the book for me. I enjoyed it, but I didn't enjoy it enough. If you are willing to suspend your disbelief for a bit and if you don't mind really unlikable characters I would tell you to pick this one up, but for most people I would recommend giving it a miss. The second half of the book just doesn't make up for how awful the first half is. I received this book from the publisher and Netgalley in exchange for my honest review of the book.
Posted by The Book Chick at 5:00 AM