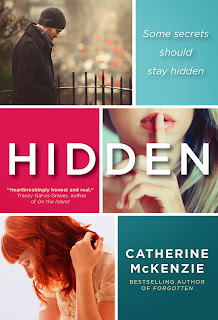 Although I have previously posted my review of Hidden by Catherine McKenzie on this blog I think that it would make a great gift for the book-lover on your holiday gift list this year so I'm posting it again. Secret Santa anyone? The fourth book by this talented author is one not to be missed!

When Jeff Manning suffers a fatal accident on his way home from work after a particularly tough day not one but two women's lives are shattered. The first woman is Jeff's wife, Claire. The second woman is Jeff's co-worker, Tish. Tish's co-workers are unaware of her connections to Jeff outside of the workplace so they are relieved when she offers to attend his funeral on behalf of the company. Only Tish knows how dangerous it is for her to insert herself in Jeff's real life, even if only for a moment.

Told from the perspectives of Jeff, Claire and Tish, Hidden examines marriage, personal relationships, and what we do to protect those that we love.

Hidden is Catherine McKenzie's fourth novel, and it is definitely one of her best. I admired the way that she was able to take a difficult subject, cheating while in a relationship, and make it not black and white but gray. I fully expected to be inclined to take sides from the beginning but as we delved deeper into the story I found that I was unable to fully side with one person or another. McKenzie has created three characters with both sympathetic and not-so-sympathetic aspects.

The character development is part of what made Hidden so compelling. We are presented with these pictures of two women, both far from perfect, but with lives that somehow work for them. The glimpses into their home lives and the challenges that they encounter humanized them for me. Now they were not just two women who loved the same man, but they were mothers and employees and wives with hopes and dreams of their own. Jeff's voice certainly lent an interesting perspective to the situation and I love that McKenzie chose to include it.

Well-written, insightful, and impossible to put down Hidden is another must- read by Catherine McKenzie. My thanks to the publisher for providing me with a review copy. 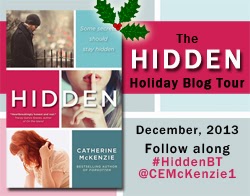