Review: "The Banks of Certain Rivers" by Jon Harrison 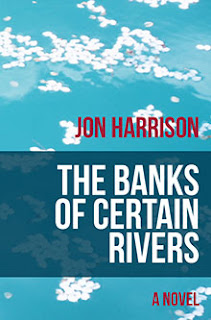 After a tragic accident left his wife, Wendy, in a permanent vegetative state, Neil Kazenzakis has been working on making the best out of his circumstances. Several years after the accident his son Chris is well-adjusted, all things considering, Neil is a popular high school teacher, and he is even managing to have a secret yet loving relationship with one of the nurses that takes care of his mother-in-law. His carefully ordered life manages to fall apart all at once as a student posts a questionable video of him on YouTube, his son finds out about Neil's girlfriend in the worst way possible and Neil begins to receive malicious calls and e-mails. What follows is the heartening story of how Neil copes with everything that has been thrown his way while attempting to protect those that he loves the most.

Harrison's debut novel is truly a joy to read. Despite the fact that our protagonist Neil has had more than his share of bad luck The Banks of Certain Rivers is an uplifting and encouraging story of a man who refuses to let life get him down for long. Right from the beginning the reader wants Neil to find his personal happy ending. This is a man who refuses to give up despite the fact that he lost his wife in every way that counts tragically and at a young age. He continues to hold his head high and, by all accounts, seems to be doing a fantastic job raising his son. When Neil has more trouble heaped on him than one man should have to handle I was on the edge of my seat hoping for a positive conclusion. I appreciated that the storyline always felt realistic and never overdone.

The Banks of Certain Rivers is well-written and eloquent with a bevy of characters both well-rounded and sympathetic. What I took from the book is that life is rarely black and white and that when we are handed more than we think that we can handle we need to hang in there while we try to achieve our own personal happy ending. The subject matter could potentially have been depressing, yet it managed to be both uplifting and encouraging. The Banks of Certain Rivers is one of those stories that you won't forget about after you finish the book and if you haven't read it yet I strongly encourage you to do so!
Posted by The Book Chick at 5:00 AM