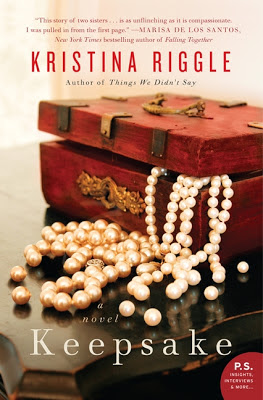 Trish is a divorced working mom of two. She's not perfect, but who has the time for that? She loves her boys so much that it physically hurts which is why it's shocking to her when Child Protective Services shows up at her door, threatening to remove her youngest child from her care following a household accident.

CPS showing up is a catalyst for a painful self-discovery- Trish is a hoarder, just like her mother was up until the day of her death. And unless she gets her act together and starts cleaning up her home and her life it is possible that she will lose her boys for good.

The task at hand is just too overwhelming for one woman and Trish reluctantly enlists the help of her eldest son, who refuses to even live at home, as well as her estranged sister and her emotionally distant father. Trish is loathe to reveal the tender underbelly of her emotions to two people who have not had a very positive impact on her life but she feels that she has no choice. Little does Trish realize that while her sister Mary seems to have the perfect life, she is actually battling demons of her own.

As Trish's family rallies around to help her to clean up her home and get her act together for good, raw emotions that have long been buried surface and force all involved to face their individual issues.

I was drawn into Keepsake from the beginning. I was expecting not to like Trish. I recall wondering who would allow their home to become so messy that they are at risk of losing their children as a result? What caring mother would willingly do that? However Trish is an incredibly sympathetic character. It is obvious that she loves her children so much and that her hoarding is not a matter of her being lazy, but that it is a disease that is both painful for her and difficult to overcome. I was drawn in to Trish's story and I appreciated the insight that author Kristina Riggle offers into hoarding and how it affects the people that hoard and their family. It was clear that Riggle painstakingly researched this fascinating topic before writing this book.

I also appreciated the addition of Mary, Trish's sister, into the mix. Keepsake was not just Trish's story, but it was the story of two very different sisters attempting to form a bond after years of hurt feelings and misunderstandings. While Mary's life looks perfect on the outside, especially to the imperfect Trish, her ongoing emotional struggles make this illusion far from the truth. Yet, somehow these two very different women come together, task at hand, and they begin to make amends.

Keepsake is one of those books that will stick with me for a long time. Sometimes I will read a book and quickly forget about it, but Riggle has created characters that had an impact on me and she has written a story that has changed how I perceive the world around me. My thanks to the publisher for providing me with a review copy of this book.
Posted by The Book Chick at 5:00 AM