Review: "From Notting Hill With Love...Actually" by Ali McNamara 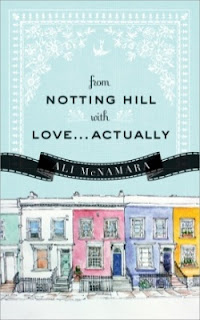 Scarlett O'Brien lives, eats, and breathes films. Her practical father and her solid fiancé think that her obsession is ridiculous but Scarlett just can't help it- she fancies herself the heroine of one great RomCom and she refuses to let go of the idea.

When the opportunity to housesit in iconic Notting Hill presents itself to her it is just too great to pass up. Soon Scarlett finds herself in Notting Hill and it feels too good to be true. The first day that she arrives she meets a new friend and a surly neighbor. Soon she's caught up in solving a mystery from her past but will Scarlett continue to live like she's the lead in one of her movies or will she be abruptly brought back to reality?

I have to admit that at first I wasn't in love with From Notting Hill With Love...Actually. It started out too cutesy and coincidental for me and I wondered if the entire book was just going to be a mash-up of various RomCom films. I stuck it out, though (it's rare that I don't complete a book once I've started it) and luckily it improved.

I really enjoyed the relationship that formed between Sean and Scarlett. The tension was there from the beginning and I thought that Sean was a really sweet character. He had a gruff edge but somehow he really managed to come through for Scarlett every time she got into her various binds. I also enjoyed the mystery from Scarlett's past that she and Sean try to solve. The ending was unexpected in some ways and predictable in others, but I really did like it. McNamara's writing style and character development came together to change my mind about the book as a whole.

A sequel to this book titled From Notting Hill to New York....Actually is available now for Kindle. My thanks to the publisher for providing me with a review copy of this novel.