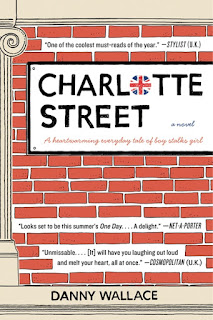 Jason Priestly (no, not that one) is stuck in a rut. After losing his girlfriend and quitting his teaching job to pursue his passion for journalism, things are not looking up. He lives in an apartment above a video-game store beside the place that you think is a brothel but actually isn't, he's freelancing for the newspaper that you take on the subway but don't actually read, and his last Facebook status read Jason Priestly is...eating soup. Jason is beginning to think that it is time for him to make some changes. It's at that moment when he decides to help a woman struggling with her packages get into a cab. They share a brief smile and then the cab pulls away. Upset that he didn't seize the moment, he is delighted when moments later he finds that he is holding her disposable camera in his hand. The question is: should he develop the film and find the girl?

So begins Jason's quest to reunite with the beautiful girl with the blue coat. With some help from his best friend Dev, as well as help from a few new friends that he collects along the way, Jason comes to the conclusion that we are all in charge of our own fate.

What an amazing novel! Reading Danny Wallace's fictional debut was like curling up under a fuzzy blanket on a cold winter's night. It managed to be incredibly witty while simultaneously comforting and familiar. If you're a fan of books with a British setting like I am then I'm guessing that you will enjoy this book even more!

I loved a lot of things about Charlotte Street but special mention goes to the friendship between Jason and his best friend Dev. Dev really got to me, but in a good way. Dev is a bit of a geek but his heart is big and that part of his personality really stood out for me. I loved his dogged determination, even when Jason was digging his heels in and resisting Dev's suggestions. I also loved the fact that while Charlotte Street was primarily focused on Jason's quest to find The Girl, the story was far from being one-dimensional. Wallace incorporates other important themes into the story such as the value of friendship, controlling one's fate, and getting past a particularly painful breakup. Portions of the ending were what I was expecting, but other parts completely took me by surprise. My only complaint was that it felt like it was about 50 pages too long and a few parts started to drag for me. Overall, though, reading Charlotte Street was a pleasure and I devoured it.

Fans of Nick Hornby or David Nicholls rejoice- Danny Wallace has arrived!
Posted by The Book Chick at 5:00 AM