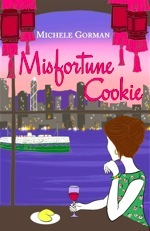 Hannah moved to London from the United States on a dare and, miraculously, it all turned out well. Despite accidentally sleeping with her boss and then ending up working for the supervisor-from-Hades, Hannah managed to make new friends in London and she even snagged a boyfriend. Shortly after meeting Sam Hannah finds out that he has taken a job in Hong Kong. Loathe to let her new love go, Hannah decides to make the move herself, even if he didn't technically invite her to.

Luckily, Hannah's best friend from the States, Stacy, has had enough of missing her friend and is moving to Hong Kong as well. Once there the two experience more than a little culture shock but manage to adjust fairly quickly. Hannah finds a job that she is surprisingly good at, but when she finds out that Sam has been transferred to an entirely different country and that someone at her new job is out to get her, Hannah begins to wonder if moving to Hong Kong was the right move to make after all.

I loved Gorman's vivid descriptions of all things Hong Kong. The book actually begins with an amusing scene between Hannah and the waitress at a restaurant where Hannah is trying to eat. The woman is asking Hannah if she would like "yarrow nudens" and Hannah declines, having no idea what a yarrow nuden is and not being willing to find out, but then she is disappointed when her soup does not come with any yellow noodles. The book continues to describe so many wonderful things about Hong Kong, including the way of life there, what living there entails, and the scenery that I truly felt like I was there alongside Hannah. Give the fact that Gorman actually moved to Hong Kong for a while I knew that her descriptions were authentically from an outsider's perspective.

Hannah herself is the kind of character that you love but want to smack at the same time, and that's the point. She follows Sam to Hong Kong despite the fact that the relationship is quite new and then she deludes herself throughout the book that Sam is as invested in their relationship as she is. I found her blind faith amusing at times and annoying at others, but following her journey as she found her true self made reading this book a satisfying reading experience.

My only complaint was that Hannah's inner voice seemed more British than American at times. Sam, Stacy and Hannah are all ex-pats now living in Hong Kong but while Sam and Stacy's voices stayed American-sounding, Hannah's often sounded British. She referred to sweaters as "jumpers" and to a candy store as a "sweetie shop" and I'm not quite sure that living for a year in London would change how you refer to things in your own mind. Perhaps it would, and since I have never moved there I can't say for sure if it would or if it wouldn't, but if Hannah's voice changes to sound more British I think that Sam's (who also lived in London) should have as well.

Light, funny, and thoroughly entertaining, Misfortune Cookie is a book that I can absolutely recommend. It was well-written and well-edited and it offered me a fascinating glimpse into what life in Hong Kong would be like for an outsider living there. My thanks to the author for providing me with a review copy.
Posted by The Book Chick at 11:15 AM