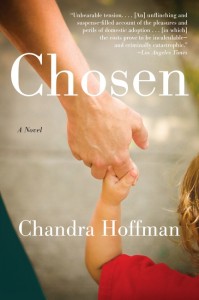 Chloe Pinter is a caseworker with Portland's Chosen Child domestic adoption program. Despite the fact that domestic adoption can be a difficult program to work in, with low success rates and few children available for adoption, the image of her handing over a newborn to the new parents sticks firmly in her mind. In her line of work she meets with all kinds of birth parents from many different situations, and she clings to the idea that she will be giving these children the opportunity of a better life.

At home things are not quite as ordered as they are at work. Chloe's boyfriend is a free spirit who feels like he is being stifled by their domestic situation. A surfer who never stays in one place for long, he longs to stretch his wings and fly away, with or without Chloe.

Chloe's dream of creating happy families comes to an abrupt halt when three couples become involved in a domestic adoption nightmare. One young pregnant couple, barely able to support themselves, struggle with giving up their unborn child. Another couple have struggled with infertility for a long time but they hope that their upcoming adoption will go through. A third couple, college sweethearts, have been plagued with infertility but are finally pregnant and due to have their baby anytime now. When a baby goes missing, a chain of events is set into motion that will challenge everything that the couples once thought to be true.

I found Chosen to be a compelling and interesting story. I enjoyed the fact that while the focus was on domestic adoption, we get to know the main character Chloe on a more intimate level. We're with her while she's at work, dealing with the birth parents and the potential adoptive parents, but we also get to know her at home while she's dealing with a boyfriend whom she loves but who is a free spirit. This lent a certain personality to the story that helped me to relate to it more directly. We also get to see things from the perspectives of both the birth parents and the potential adoptive parents, which lends an air of authenticity to the story.

While it deals with a sensitive topic, one that few fictional book choose to address so directly, I think that Chandra Hoffman does an excellent job presenting multiple perspectives on the issue. Although some who have read the book didn't care for the ending, that was one of my favorite parts. I thought that the book was wrapped up in a way that way that made sense, despite the fact that it may not have been the most realistic choice. Ultimately Chosen is a gripping story well worth reading for those who enjoy women's fiction with grit.

Thank-you to TLC Book Tours for inviting me along on this tour!