Review: "Beneath a Starlet Sky" By Amanda Goldberg and Ruthanna Khalighi Hopper 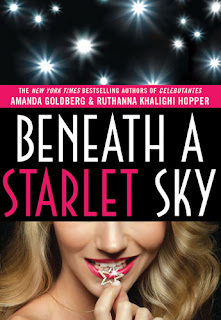 Lola Santis is the CEO of a struggling fashion line that is desperate for its big break into the fashion world. Complicating things is the fact that Lola's doctor fiance lives in Los Angeles and she finds herself frequently travelling between the fashion hub that is New York and her "real" life in L.A. Lola's father and brother are both Hollywood directors who are unfortunately in direct competition with each other, which leads to frequent tension in the Santis household. In the midst of all this craziness, Lola's attention hound mother somehow comes to the conclusion that it is a good idea to allow a reality show to be filmed in their house.

When Lola's company's wedding dresses are chosen to feature in the biggest film of the Cannes Film Festival, she finds herself organizing a couture fashion show on a yacht in the middle of the ocean in the hopes of launching the line into the big time. Will she survive Cannes? And will she be able to escape the craziness of her life long enough to figure out what's real and what's Hollywood make-believe?

Beneath a Scarlet Sky was enjoyable enough. The writing was good and the transitions seamless. However I feel that ultimately this novel is one that I will read and promptly forget. I had a hard time connecting with Lola and all of the craziness invading her life and I think that this could be part of the problem for me. The books that work the best for me are the ones in which I can connect with and root for the main character in some way. Lola was nice enough, but while I was rooting for her to find a happy ending I just found her circumstances far too different from mine for me to forge any kind of a connection with her.

It is entirely possible that others who read this book will form a very different opinion from mine. Overall this book had a fun vibe to it, and reading it is similar to reading an entertaining gossip magazine.  I can recommend it to chick lit fans who enjoy good celebrity gossip from time to time (and don't we all?), however in the end this one just didn't work for me on a personal level. I thank the publicist for this review copy.
Posted by The Book Chick at 1:49 PM