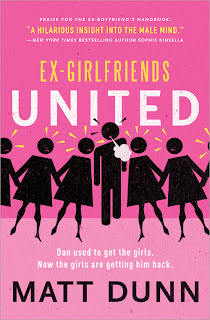 I've been a fan of the adventures of Ed and Dan since I read The Ex-Boyfriend's Handbook. If you haven't read that one yet, essentially Ed is unlucky and clueless in love and Dan has had more girlfriends than pairs of underwear. Best friends, the two hope to learn from one another and hopefully they'll have their happily ever after (although Dan's happily ever after just may involve two women and a hot tub!). In Ex-Girlfriends United Ed and Dan are back, although this time it's Dan who is looking for a love life makeover. Dan has never been one for long-term girlfriends, but when his dating life becomes non-existent he starts looking for a reason for his slump. He comes across the website SlateYourDate.com and finds out that his ex-girlfriends have left him some less-than-favorable reviews. Sick of being single, Dan sets out to track down these exes, apologize, and hopefully have them change their rating of him, but when Dan realizes that he wants the first love of his life back, will he be able to convince her that he's changed for good?

Ex-Girlfriend's United may not be as funny as The Ex-Boyfriend's Handbook, but with the return of Ed and Dan, it's just as fun. The first time around Ed was the clueless one, but this time it's Dan's turn. He may be smooth with the ladies, but he has absolutely no idea how to treat them beyond the first date, and he certainly has no clue how to sustain a relationship long-term. Ed, the sweeter and more thoughtful of the two, is willing to step up and lend his buddy a hand, but the road to redemption won't be without its awkward moments.

Well-written and light-hearted, Ex-Girlfriend's United is perfect for any fan of chick lit (or bloke lit as chick lit written by a man is called in the UK) . Other than the fact that it wasn't quite as laugh-out-loud funny as the first book in the series, I couldn't find fault with it, and I definitely enjoyed Dunn's quick wit and easy writing style. This would be great to curl up with when you're looking to beat the winter blahs (don't curse me- the snow is coming people whether you like it or not!) and I've already ordered the next book in the series, which is a great indication of how much I truly enjoyed it. My thanks to Sourcebooks for sending this review copy my way!
Posted by The Book Chick at 11:21 AM