Review: "So Near" by Liza Gyllenhaal 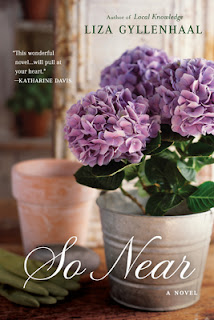 Cal and Jenny Horigan are reeling from the unimaginable loss of their precious daughter, thrown out of her car seat when their Jeep rolls over. Both Cal and Jenny secretly blame themselves for the events leading up to the accident and this guilt is driving them further and further apart from one another. When an outsider comes to stay in their small town both Cal and Jenny are inexplicably drawn to him. He offers them the solace that they can't give one another, but is he bringing them closer together or drawing them further apart? Can Cal and Jenny's previously solid marriage survive a loss this great?

Liza Gyllenhaal has written a compelling novel, one that is impossible to put down despite the tragic subject matter. Both Jenny and Cal are eaten up by their individual guilt related to the role that they took in the accident leading to their daughter's death. Both parents completely blame themselves for what happened and as a result the couple quickly becomes distanced from one another. When a handsome stranger comes to town both Cal and Jenny are drawn to him; to the fact that he knows nothing of them and of their daughter. Their anonymity becomes their solace in such a difficult time, and both become entangled with him, despite the fact that he is a less willing participant in their healing than they initially believe. Both are so desperate to be absolved of their guilt that they are able to overlook the fact that this handsome stranger is self-absorbed and cares little for their grief.

So Near is a sensitively written portrait of Cal and Jenny's grief, both individually and as a couple now missing an important piece of themselves. Despite the fact that the material is far from uplifting I couldn't stop reading the book as it headed towards its conclusion. So Near is well-written and the characters thoughtfully portrayed, making it easy for me to give this book a five star rating. My thanks to the publisher for sending me a review copy.