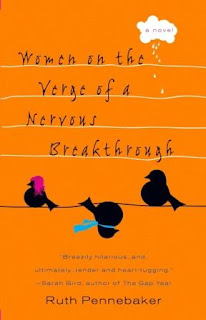 Three generations of women, Ivy, Joanie, and Caroline, are stuck together under one roof. Ivy, Joanie's mother, watched her savings whittle away as the economy turned bad and she was forced to move in with her daughter. Joanie is divorced and has just found out that her ex-husband is having a baby with his much younger girlfriend, and she is attempting to re-enter the working world in order to support herself. Caroline is Joanie's only daughter, teenaged and sullen, trying to find a place for herself in the halls of her highschool while dealing with her annoying mother and embarrasing father. These three women will have to learn to live together- or at least try not to kill one another.

Women on the Verge of a Nervous Breakthrough was a fun read. Despite the fact that this is Pennebaker's debut fiction novel, she perfectly captures the voices of the three women whose stories she tells. Ivy was my favourite, she's crotchety and fiesty, and she's determined not to let new technology get the best of her. Underneath it all she has this vulnerable side, though, and at times we're reminded that she is an elderly woman with hopes and dreams and hurts and fears of her own. I also really enjoyed Caroline's voice. She's a moody, confused teenager, not quite pretty enough to be popular, but not completely an outcast either. I remember this well from my days as a teenager and could appreciate her portions of the story.

Pennebaker writes with a light hand and incorporates plenty of quick humour into these pages, making it an enjoyable read. I especially appreciated the fact that the conclusion was left open-ended- it allowed me lots of room to come up with my own ending to the story. For more on Ruth Pennebaker and Women on the Verge of a Nervous Breakthrough please visit her website.

Thank-you to Trish at TLC Book Tours and the author for a copy of this book.
﻿
Posted by The Book Chick at 9:16 AM