Free E-Books for a Limited Time

It's a lazy Saturday, and snowing quite steadily here in Ontario. It's pretty, but is anyone besides me quite sick of the snow and ready for the lazy days of summer? So, what else is there to do right now than read? If you are lucky enough to be in possession of an eReader, or if you enjoy reading books in your desktop or on your cell phone, Bev Editions is offering three of their eBooks free with coupon code for a limited time. Getting them is as simple as opening a free Smashwords account, and using the coupon code to get them for free in the format of your choice. Books on offer right now are:

Dreaming in a Digital World by Blanche Howard
Description: Gen Varley, a PhD in computer science has ambitions for career and love. Virginal in the ways of office politics and the human heart, Gen is shocked by her boss's deceit, her boring boyfriend's secret life, and her affair with a married co-worker that reduces her to subtle stalker. Allies include a mentor who turns fairy godmother with surprising consequences. A delightful romp by a major writer.
Coupon Code: ZN22S 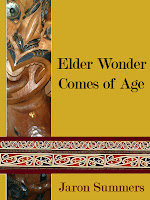 Elder Wonder Come of Age by Jaron Summers
Description: A young man's hilarious quest for sex and God. In 1962, Jerry Wonder is a 19-year-old Mormon missionary who leaves South Dakota to save souls in New Zealand. But Elder Wonder is flawed. He is a compulsive masturbator, or in Mormon parlance, a "self-pollinator." Within its comic frame, the novel is revealing of the ways older men stifle and control young men.
Coupon Code: QS59K

Ivory Joe by Martyn Burke
Description: First published by Bantam Books and hailed by critics, this is the rollicking love story of Leo and Tina Klein in 1950s New York. He is a charming rogue with ties to the mob. She is a leftist activist and manager of “Ivory Joe” Coulter, a heart-busting black musician. Burke weaves a deft plot involving the attempted theft of one of Joe's songs, to give us a joyous tale of energy and soul.
Coupon Code: BK78Z