Review: "From Here to Paternity" by Matt Dunn 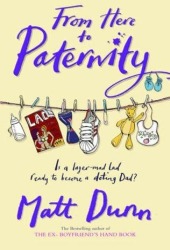 When my sister-in-law brought over several books for me to borrow, I was thrilled to see From Here to Paternity by Matt Dunn in the pile. I read my first Matt Dunn book in 2010, and I laughed the whole way through The Ex-Boyfriend's Handbook (my review). I'm eagerly anticipating the sequel to it, The Accidental Proposal, and I couldn't wait to get my next Matt Dunn fix.

From Here to Paternity tells the story of Will Jackson, a decent single guy who just can't wait to be a father. Tired of his single-guy lifestyle he really puts himself out there to women who may potentially make good mothers. He allows himself to be set up on blind dates, he tries his hand at Internet dating, and he even auctions himself on eBay. Despite his best efforts he seems to be scaring off potential mothers, rather than attracting them, and Will starts to think that he may never become a doting dad. That is, until Emma walks in. The mysterious Starbucks employee steals Will's heart but will she always remain at an elusive distance?

I had high hopes for this one, but it fell a bit flat for me. I guess that I had the hardest time believing that there is a man out there who would give up his single-guy lifestyle to become a dad, to the point where he barely cares what the mother of his child is like aside from the fact that she will be a good mother. I know that there are men out there who are desperate to become fathers, but Will seemed to undergo this complete personality shift and does some pretty unbelievable stuff.

I probably would have been able to suspend my belief on all of that but From Here to Paternity wasn't all that funny. And it didn't offer the same insight into the male mind that The Ex-Boyfriend's Handbook did. It was a good read, but not a great one, and even though this in no way discourages me from reading more Matt Dunn in the future, if you're new to him I would suggest starting with a different one of his books.