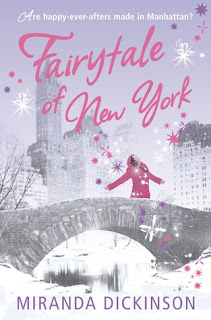 When I received this surprise in my mailbox last week (courtesy of HarperCollins UK) I was instantly drawn to the beautiful purple cover (I have a weakness for purple- show me a purple cover and I'll buy that book!) and the image of the woman looking up towards the sky and falling snow. Given that it's the winter season I decided to read this book sooner rather than later, considering that I probably won't be drawn to a winter book while lying on the beach.

Fairytale of New York is the story of Rosie Duncan, a woman who has been hurt in the past (yes, by a man) and who is afraid to open herself up to love again. She owns a flower shop in New York called Kowalski's and her co-designer Ed and her assistant Marnie are as close to family as she has on this side of the pond. Throw in her bossy but well-meaning best friend Celia and her devious brother James and there's definitely the possibility for complications.

I liked this book, but I didn't love it. Given the fact that I read book after book after book I've been spoiled by some truly spectacular writing, and Fairytale of New York didn't measure up for me. I found some of the dialogue and writing awkward, and the whole book could have used one more good edit. The character development was spot- on in places, but other characters failed to come alive for me. Celia, Rosie's best friend, was the one that I had the hardest time with. I just didn't get why Rosie liked her so much. To me she seemed a little shallow and selfish at times. Add to this the fact that this story is yet another one set in the city of New York (seriously, people, there are other great cities out there!), and this one fell flat for me.

Rest assured that it did have its good points. The reader is left in the dark about the nature of Rosie's past hurts until midway through the book and I liked having to guess what was going on. The chemistry between Rosie and her two gentlemen callers was sizzling, and the ending was incredibly satisfying. For those reasons, I wouldn't hesitate to read another book by Miranda Dickinson. I just wouldn't go out of my way to recommend this one.