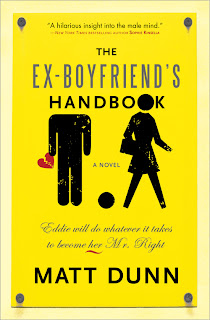 Edward Middleton is stunned when he comes back from a routine visit with his parents and finds that his girlfriend of ten years, Jane, has done a runner. All that's left in their apartment is the few bits of furniture that were his and a note telling him that Jane has gone away for a while to think their relationship through, and that no, it wasn't her, it was him.

Jane's sudden departure forces Edward to evaluate the reasons why she left him in the first place with the help of his well-meaning but obnoxious best friend, Dan. Was it the fact that they had been together for ten years and he hadn't proposed? Was it her ticking biological clock? Or was it the fact that in the past ten years Ed has let himself go? With the help of a fiesty personal trainer, a knowledgable barmaid, and the aformentioned Dan, Ed undergoes a complete makeover. He exercises, he diets, he whitens his teeth, and he buys new furniture, all in the hopes that when Jane returns she'll like what she sees and she'll remember why they fell in love in the first place.

I love chick lit. And chick lit written by a man? I'm hooked. Matt Dunn has written an absolutely hilarious, insightful, and entertaining book. By hilarious I mean that I laughed out loud many times while reading it, which forced me to try to explain to my husband what I was laughing at. After a while of this I gave up trying to explain and just said "book". Ed's adventures in improvement were endearing and funny and you just can't help but root for him the whole way through the book.

Thank-you to Sourcebooks for sending me this review copy.
Posted by The Book Chick at 3:00 AM