Review: "10 Reasons Not to Fall in Love" by Linda Green 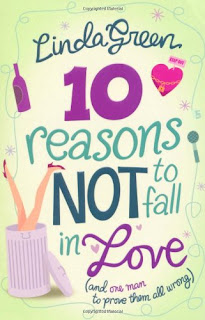 Jo Gilroy's boyfriend left her on their son's first birthday and she's not eager to jump back into the dating game. She can come up with lots of reasons not to: she would have to shave her legs, she'd have to put away her maternity underwear, her ex-boyfriend also happens to be her boss, and most importantly, she couldn't risk a potential boyfriend hurting her son, Alfie. Alfie's now two years old, and when they go to a children's Christmas party she's instantly attracted to the good-looking and sweet ballon man, Dan. Alfie takes an instant liking to Dan as well and the next thing that Jo knows, they're regularly meeting up with him. When will she admit that she's not meeting him just for Alfie's sake, but for her own as well? And is she ready to open up her heart again?

10 Reasons Not To Fall in Love was far deeper than I was expecting. Having been a single mother myself for a few years I could relate to Jo's hesitation to get involved with someone in order to protect her son. She wrestles with so many doubts and fears and is reluctant to jump back into the dating pool. I appreciated Linda Green's insight into this topic. Dating is difficult, and dating as a single parent? Near impossible.

As we get to know Dan the balloon man we find out more about him and his past as well, and Green deftly handles yet another difficult topic (one that I won't get into for the sake of avoiding spoilers). This is one of those cases when you shouldn't judge a book by its cover- it may look like this is yet another "typical" chick lit book, but it is most certainly not.

The characters were realistic, the plot engaging, and the ending incredibly satisfying. 10 Reasons Not to Fall in Love is a great read for those who enjoy their chick lit with a little substance on the side.