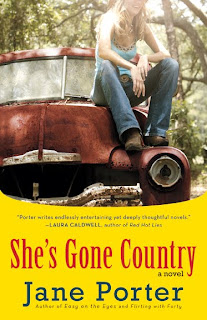 Shey Darcy, a 39-year-old former top model for Vogue and a former Sports Illustrated swimsuit model, had it all in New York. That is, until her husband decided that he was in love with someone else and requested a divorce. Still in love with her husband and finding it hard to cope with his sudden news, Shey moves herself and her three teenaged boys back home to Texas to the family ranch.

The boys aren't all thrilled with their new hometown, and struggle with fitting in. Hank is desperate to return to his exclusive school in New York, where acceptance to a top College was guaranteed. Bo is having trouble fitting in at his new school and struggles with depression. Cooper is the only one who has embraced country life with open arms.

Shey's not having the easiest time of it either. Now that she lives so close to home her Southern Baptist mother is insistent that she returns to the church. Her brothers are well-meaning but overprotective, and then there's the problem of Dane Kelly. Dane broke her heart once when she was young, and she's not sure if she can go through that again in her vulnerable state. Her feelings towards him are as strong as ever, though, and Shey must decide if she can let go of the past in order to embrace her future.

She's Gone Country is the first novel by Jane Porter that I've read, and I have to admit that while I didn't love it, I did like it. The writing was solid and the plot interesting, but the chemistry between Shey and Dane just felt too obvious. In the beginning of the book Shey was devastated by her husband's unexpected announcement, but by the end of the book (not that many months later), she was head over heels in love with Dane. I wish that she would have given herself and her kids a little time to heal before diving into a relationship with Dane, despite the fact that he was a handsome cowboy there for the taking. There was some romantic tension there, but I felt that it was a bit overblown.

What I did really enjoy about the book was the relationship between Shey and her three teenaged sons. As the mother to three boys myself (despite the fact that it will be a bit before all three are teenagers), it was interesting to see how she handled being a single mother. Clearly there was a strong bond between Shey and her boys, one that took both time and effort to foster, and I appreciated how Shey handled the challenges of parenting them. For the most part she really did put them and their needs ahead of her own.

Although I found some of the book predictable, I did enjoy it for the most part and would pick up a book by Jane Porter in the future. You can read an excerpt of the book here.

Thanks to Crystal at BookSparks PR, I have one copy of She's Gone Country to give away. How to enter:

1. *Mandatory Entry* Tell me in a comment that you would like to win this book! Leave me an e-mail address so that I can contact you if you win. No e-mail= no entry.

3. *Bonus Entry* Spread the word about this contest in some way. Facebook it, Tweet about it, add it to the sidebar of your blog, whatever! Just come back and let me know in a separate comment how you did it.

This contest is open to residents of the US and Canada, and runs until September 15, 2010 at midnight. Winners will be contacted by e-mail. Good luck!
Posted by The Book Chick at 9:09 AM