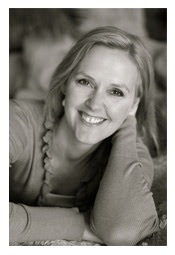 Please join me in welcoming Christine Lemmon, author of the recently released Sand in my Eyes to The Book Chick! If you missed my review, you can read it here. Today Christine Lemmon blogs about what it is like to be a mother and a writer, and how her kids feel about it:

"Being a mother has definitely influenced my writing. When my son was two and my second three months old, I feared I might never find the time to write again. But then one morning, I set my alarm for five o’clock and tiptoeing to the stairs outside their bedroom, I turned my computer on and began writing Portion of the Sea. To me, going to those stairs early in the morning, with nothing but my laptop lighting the way, was like picking up the paddles and rowing, rowing, rowing, writing, writing, writing out to my very own Portion of the Sea to reclaim the treasure I thought I had lost for good. Had I not been a mother, experiencing the tension between motherhood and selfish pursuits/passions, I would not have been able to write Portion of the Sea.


In the prologue to Sand in My Eyes, I start with a mother writing a letter to her daughter who left for college, wanting desperately to tell her everything there is to know about life, and thinking of all the things she may have forgotten to teach her daughter along the way. When I write, I tap into my heart and soul and there is nothing in life more important to me than my children. They are like masterpieces in the works and as their mother I am here to help mold them into the adults they become. This comes out in my writing. My main characters are always daughters, mothers and grandmothers.

As the story of Sand in My Eyes switches back to when her children were small again and she was running around her messy house like a chicken with its head cut off, trying to keep up with it all, I used my own experiences: “No one told me it could be so hard, that motherhood would give me indescribable joy in exchange for who I was as an individual …” and “…I was an overwhelmed woman, wondering whether one too many crazy mornings mixed with lack of sleep might have a tragic cumulative effect, like one too many huffs and puffs and the house falls down.” I could not have written Sand in My Eyes if I were not myself in that phase where my greatest daily accomplishment was simply getting me and the kids dressed and out the door without losing my mind.

I get most of my bursts of inspiration for my novels while playing outdoors with my children, sitting with them at the park, watching sunsets, or wading in the water. But I have to keep it all inside me until we get home and they go to bed and I can write. Motherhood and creativity, I’ve found, are extremely compatible and because I’m with the kids throughout the day and can only write when they are sleeping, writing is like a secret affair that I can think about during the day and by evening, I can hardly wait to light my candle, put my classical music on and begin! I look at writing as my selfish time. It’s adult conversation and my characters do and say whatever it is I want them to.

Because I typically write from five to seven in the morning, or from nine until midnight at night, I haven’t sacrificed family time for writing. I have, however, gone without television for six months to a year at a time. Sex in the City? Gray’s Anatomy? American Idol? I’m embarrassed to admit I’ve never watched any! If I make the choice to write, it means disciplining my self to write every single morning or night at the same time and to do so, I have to give up certain things. During the writing of Portion of the Sea, I grew tired from writing early in the morning and so I joined a gym that had a nursery. Rather than working out, I’d sit with my laptop in the ladies lounge, writing. My husband noticed I wasn’t getting in better shape and when he found out what I was doing, he cancelled my membership.

Two hours a night doesn’t sound like a lot of time taken out of life to write, but when I have babies or children with me all day long, those two hours at night would have been the time for me to fold laundry, hang out with my husband, read novels, or watch a movie.

The kids never see me writing. They’re oblivious to it all. A few months ago, my nine-year old spotted a woman on the beach reading my book. He looked at me oddly, and said, “Mom, when did you write that book?” I laughed and told him, “When you were sleeping.”"

Thank-you so much for stopping by! I love the two quotes that you included from Sand in my Eyes- both are incredibly true. You can find out more about Christine by visiting http://www.christinelemmon.com/, or you can find her on Facebook and Twitter.
Posted by The Book Chick at 7:15 AM