Review: "The Lies We Told" by Diane Chamberlain 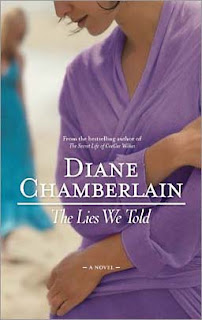 Rebecca and Maya are sisters with a past that haunts them. As teenagers- Maya was 14, Rebecca 18- they witnessed the murder of their parents by one of their father's ex-students. Rebecca put her life on hold to raise her little sister and to keep her out of foster care, and both went on to become doctors. That's where their similarities end- Rebecca is now a doctor working with DIDA, a group of doctors sent to disaster areas. Maya is an orthopedic surgeon working with children (she knits tiny little bones together), married to a fellow doctor, Adam, who is desperately trying for a baby.

After Maya miscarries her third baby, Adam is called to help when a hurricane devastates the coast of North Carolina. Realizing that a pediatrician is badly needed, Adam convinces timid Maya to come down to help out. Shortly after her arrival, the helicopter bringing Maya and several patients to a local hospital goes down. Maya is missing, and she is presumed dead.

Meanwhile, Rebecca, usually the one who jumps from one relationship, one adventure, to the next, finds herself dreaming of motherhood. Even worse, she finds herself intensely attracted to Adam, her sister's husband, and finds herself unable to stop thinking about him. Adam and Rebecca turn to one another in grief and in passion, unaware of the fact that Maya is alive, but injured and stranded on a small island with strangers. Maya must find a new strength to get her through a threatening situation, not knowing that life as she knew it has changed forever.

I enjoyed The Lies We Told far more than I had even anticipated. I tore through it at almost a frantic pace, desperate to know what was going to happen next. Diane Chamberlain has written a book that is both compelling and almost impossible to put down once you've started. There's also a hint of mystery which I enjoyed. When Maya finds herself stranded on an island with strangers I knew that there was something wrong, but it was not until the later chapters that I was able to put my finger on what it was that was amiss. The fact that Diane Chamberlain kept me guessing was one of the reasons that I couldn't put The Lies We Told down.

What I enjoyed the most about this book was watching Maya come in to herself. At the beginning of the book she is timid. She allows her sister and her husband to baby her, and she is fine as long as she is tucked into her safe little cocoon. Even when she agrees to come to North Carolina, she is only doing it because her husband has asked her to, not because it is something that she wants to do for herself. Later, when Maya is stranded, she is unable to rely on others and instead has to begin relying on herself. She surprises even herself with how strong she becomes, and that is when she became my favourite character in the book.

The conclusion of the book was not what I was expecting initially, but it was exactly how I hoped it would end. Chamberlain has written a book filled with surprises that you'll want to read in one sitting. Thank-you to Tricia at Media Muscle for this review copy!

Diane Chamberlain is currently hosting an online book signing for those who are unable to meet her in person. Simply fill out this form and she will send you out a personalized bookplate! This offer ends on June 14th, so hurry! More information about this promotion can be found here.

Rating: 4 stars out of 5
Recommended to: Fans of women's fiction and stories about the bond between sisters
Challenges: 2010 100+ Reading Challenge, New Author Challenge 2010
Posted by The Book Chick at 4:08 PM