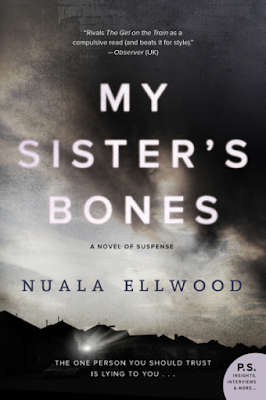 Kate Rafter, an investigative reporter, has spent her whole life trying to escape the small town that she grew up in. When her mother dies she finds herself returning to Herne Bay, the place that she's tried so hard not to return to, in order to clear up her mother's affairs. Her sister, Sally, who has never left the small town, is unable to help Kate. Drowning herself in alcohol while trying to deal with tragedy of her own, Sally is shut off from Kate and her pain.

When Kate starts realizing that there is something not quite right about the neighbors next door, she tries to convince her sister and her sister's husband to check in to it, but they both brush her off, blaming Kate's time in war zones and possible post-traumatic stress. Is Kate out of her mind or is there something more sinister lurking beneath the surface of the neighbors next door?

I thoroughly enjoyed this work of psychological fiction. Fans of the unreliable narrator technique used in The Girl on The Train and The Woman in Cabin 10 will enjoy this story about one woman and her battle against her own mind. I personally enjoyed the twists and turns, and alternated between being convinced that Kate was experiencing post-traumatic stress and that there was indeed something going on with her neighbor.

Kate, a strong character, was difficult to empathize with at first since she had built a hard shell around herself and this is evident from the beginning. As she slowly reveals her soft side we as readers become more enamored with her and become sympathetic to her plight.

While the pacing of this story was a little slow to start with, the second half of the book picks up and I was engrossed! It was definitely worth hanging in through the first half for.

My Sister's Bones is a worthy debut from author Nuala Ellwood and I'm looking forward to finding out what she has in store for her readers next! My thanks to TLC Book Tours for inviting me along on this tour!