IT HAPPENS ALL THE TIME by Amy Hatvany 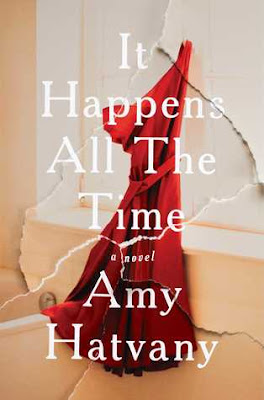 Amber and Tyler have been friends since they were kids. Both had difficult issues to deal with growing up- Amber struggled with anorexia despite a solid home life and Tyler had to deal with a demeaning father whom he was never good enough for- and when times were tough they leaned on one another.

As they grew older Tyler began to have feelings for Amber, feelings that he confessed but weren't reciprocated. Both wanted to continue being friends, but things were awkward.

Coming home after her college graduation, newly engaged and just a little unsure about how fast things were moving in her life, Amber finds herself turning to Tyler for comfort. One night, fueled by her own uncertainty and the addition of alcohol to the mix, Amber finds herself kissing Tyler. What happens next will destroy both of their worlds.

This is, no doubt, a hard book to read. The subject matter, rape, is not one that is easy to read about, however author Amy Hatvany has handled it with sensitivity and grace. This story isn't about rape between strangers, but rape between friends, so the subject is even more difficult to read about. Rape between friends changes so many things in your day to day life, and after a rape like this occurs there is so much aftermath to deal with.

IT HAPPENS ALL THE TIME brings up a really important issue, the issue of consent when it comes to sexual activity. When does "no" mean "no"? What about the events leading up to the rape? Does what a person wears or how a person acts translate into unspoken consent? Hatvany delved in to this topic, and she did such a great job examining it from all angles. She wrote this story from alternating perspectives and presented a well-rounded version of the story. I appreciated this. It may have been easier to write this solely from the female's perspective, but Hatvany didn't take the easy way out and she presented this from both points of view.

IT HAPPENS ALL THE TIME is poignant and thought-provoking. It brought some delicate issues to life on the page and it made me consider how I would deal with a similar situation should it arise. Well-written and timely, IT HAPPENS ALL THE TIME is a must-read for women everywhere that will have you thinking about it well after you've closed the book.
Posted by The Book Chick at 4:00 PM