THE RAMBLERS by Aidan Donnelley Rowley 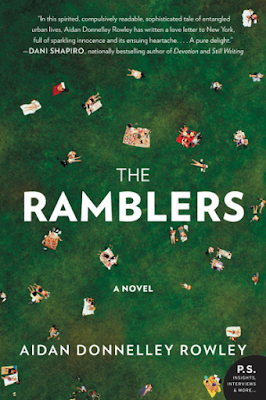 For fans of J. Courtney Sullivan, Meg Wolitzer, Claire Messud, and Emma Straub, a gorgeous and absorbing novel of a trio of confused souls struggling to find themselves and the way forward in their lives, set against the spectacular backdrop of contemporary New York City.

Set in the most magical parts of Manhattan—the Upper West Side, Central Park, Greenwich Village—The Ramblers explores the lives of three lost souls, bound together by friendship and family. During the course of one fateful Thanksgiving week, a time when emotions run high and being with family can be a mixed blessing, Rowley’s sharply defined characters explore the moments when decisions are deliberately made, choices accepted, and pasts reconciled.

Clio Marsh, whose bird-watching walks through Central Park are mentioned in New York Magazine, is taking her first tentative steps towards a relationship while also looking back to the secrets of her broken childhood. Her best friend, Smith Anderson, the seemingly-perfect daughter of one of New York’s wealthiest families, organizes the lives of others as her own has fallen apart. And Tate Pennington has returned to the city, heartbroken but determined to move ahead with his artistic dreams.

Rambling through the emotional chaos of their lives, this trio learns to let go of the past, to make room for the future and the uncertainty and promise that it holds. The Ramblers is a love letter to New York City—an accomplished, sumptuous novel about fate, loss, hope, birds, friendship, love, the wonders of the natural world and the mysteries of the human spirit.

I fell in love with Aidan Donnelley Rowley's writing when I read LIFE AFTER YES several years ago on the recommendation of a friend. I was so excited to hear that she had written another novel and I couldn't wait to get started.

I really wasn't disappointed. I loved THE RAMBLERS as much as I expected to. First and foremost this is the story of three individuals living in New York. Smith is living in the same apartment building as her wealthy parents. Desperate to carve out an identity for herself as well as survive her sister's upcoming wedding while reeling from a bad breakup, Smith leans on her dear friend and roommate Clio as well as new friend Tate. Clio is a museum curator and bird researcher. In a relationship with a man older than her who wants to take things to the next level, Clio is hesitant to reveal her past to him, fearing that he may leave her if he really knows what she has been through. Tate is going through a divorce while learning how the other half lives. Having recently sold his app to Twitter he thought that perhaps the money would be enough to patch up the holes in his marriage but is coming to terms with the fact that money doesn't fix everything.

I thoroughly enjoyed reading this novel. The wait was worth it! The characters leapt off of the page and came to life in my imagination. I cared about them, and I loved the gradual development of their individual stories. Their voices were written in a very authentic way. Tate's voice was very different from Smith's and Clio'sand it was hard to believe that those voices came from the same author. I love how Rowley chose to write the book- several chapters at a time were dedicated to one character's story, then the next several chapters were dedicated to another character's story, and so on. It gave me time to get invested in each story, and it left me wanting more.

THE RAMBLERS is both an ode to New York, the city where all three of these characters live, and the story of three people who are ready to take important next steps in their personal lives. The plot is compelling and compulsively readable, the characters incredibly well-developed and the ending perfect, despite the fact that it left me wanting more (perhaps that is what was so great about it!). I truly hope that I don't need to wait six more years to read another gem by Aidan Donnelley Rowley. 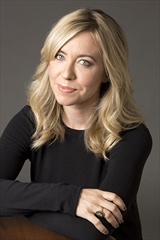 Born and raised in New York City, Aidan Donnelley Rowley graduated from Yale University and received her law degree from Columbia University. She is the author of a previous novel, Life After Yes, and the creator of the Happier Hours Literary Salons. She lives in Manhattan with her husband and three daughters. Find Aidan on Twitter, Facebook, and Instagram.
Posted by The Book Chick at 5:00 AM