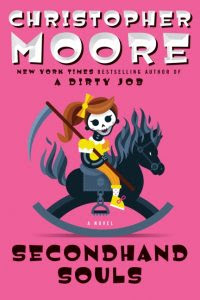 In San Francisco, the souls of the dead are mysteriously disappearing—and you know that can't be good—in this delightfully weird and funny sequel to the New York Times bestseller A Dirty Job.

It seems like only yesterday that Charlie Asher took on a very dirty job—collecting souls and keeping the Forces of Darkness at bay. The new gig came with the Big Book of the Dead and a host of other oddities: creatures under the streets, an evil trinity of ravenlike Celtic death goddesses, and one very bad Underworld dude attempting to conquer humanity. Along with a cohort of other oddballs, Charlie faced off against these denizens of darkness—and met his own end. But thanks to Audrey, his Buddhist-nun boo, his soul is still alive . . . inside a fourteen-inch-high body made from lunch meat and spare animal parts. Waiting for Audrey to find him a suitable new body to play host, Charlie has squirreled himself away from everyone, including his adorable seven-year-old daughter, Sophie, who enjoys dressing up like a princess, playing with her glitter ponies, and—being the Luminatus—spouting off about her power over the Underworld and her dominion over Death.

Just when Charlie and company thought the world was safe, some really freaky stuff hits San Francisco. People are dying, but their souls are not being collected. Someone—or something—is stealing them and no one knows where they are going, or why, but it has something to do with that big orange bridge. Then there's the Taser-wielding banshee keening about doom who's suddenly appeared while Sophie's guardian hellhounds, Alvin and Mohammed, have mysteriously vanished. Charlie is just as flummoxed as everyone else. To get to the bottom of this abomination, he and a motley crew of heroes will band together: the seven-foot-tall, two-hundred-and-seventy-five-pounds-of-lean-heartache Death Merchant Minty Fresh; the retired policeman-turned-bookseller Alphonse Rivera; the lunatic Emperor of San Francisco and his dogs, Bummer and Lazarus; Mike Sullivan, a bridge painter in love with a ghost; a gentle French-speaking janitor named Jean-Pierre Baptiste; and former Goth girl Lily Darquewillow Elventhing Severo, now a part-time suicide hotline counselor. With little Sophie babbling about the coming battle for the very soul of humankind, time is definitely not on their side. . . . Irresistibly zany, rich in humor, heart, and spirit, Secondhand Souls is vintage Christopher Moore.

A Dirty Job was the first book that I read by Christopher Moore, and it was the book that made me fall in love with this talented author. Despite the fact that I've read several other books that he has written since then, A Dirty Job holds a special place in my heart. I was thrilled to discover that he had come out with a sequel, and I read it from the first page to the last in nearly a single sitting. It is that good!

I loved revisiting characters from the previous book, and I enjoyed getting to know some new ones. The humour is unrivaled, and the wackiness of the plot and characters will keep the reader both laughing and guessing. The ending was unexpected and satisfying. I would recommend reading A Dirty Job before reading Secondhand Souls, but I would hazard to say that it is not absolutely necessary to enjoy this book without reading the other one first.

Moore is a truly unique author with something fresh and different to bring to the table. No matter what he writes, he keeps me guessing. I can only hope that he will bring these characters to life once more with a third installment to this series! My thanks to TLC book tours for inviting me along on this tour. 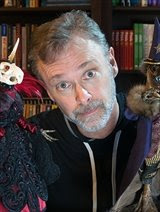 Christopher Moore is the author of fourteen previous novels, including Lamb, The Stupidest Angel, Fool, Sacré Bleu, A Dirty Job, and The Serpent of Venice. Find out more about Christopher at his website, connect with him on Facebook, and follow him on Twitter.
Posted by The Book Chick at 1:36 AM