Review: "Food Whore: A Novel of Dining and Deceipt" by Jessica Tom 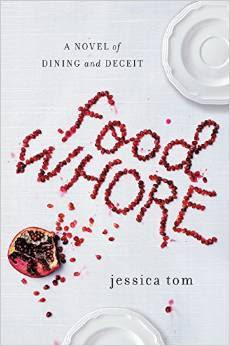 Tia Monroe is fresh out of college and ready to experience all that graduate school and New York have to offer. She's aware that adjusting to New York will be a challenge, but she's willing to take it on, especially with loyal college boyfriend Elliot by her side.

Tia is lusting after an internship with her long-time food idol Helen Lansky, and she will do just about anything to get it. Or so she thinks. When she is approached by New York Times food critic Michael Saltz she can't imagine what he wants from her, but she is about to find out. Michael has lost his sense of taste completely and needs a "ghost taster" of sorts- someone like Tia who knows food and would be able to help him to write his reviews. The job comes with the lure of free designer clothing, expensive meals out, and the possibility of working with her idol full-time once Michael has an experimental surgery to get his sense of taste back. Although Tia knows that it's risky she can't help but be sucked in by the lure of Michael's promises. Seeing her words in the New York Times will almost be payment enough!

As her new secret career launches, Tia finds herself losing the things that once meant the most to her including her integrity, her coveted grad school scholarship, her friendships and her boyfriend Elliot. Suddenly she finds herself needing to evaluate if it's worth it or not. After all, does anyone's career ever start out at the top?

I love food, and I love food TV, so picking up Food Whore was a no-brainer! For me, it started out slow. Michael Saltz is a despicable character so it's hard to root for him, and I found all of the elaborate food descriptions a tad pretentious. At that point in the book Tia is treating her boyfriend and friends as if they are disposable, so it was hard to like her as well.

It wasn't until about two thirds of the way through the book that Food Whore became more interesting to me. The plot certainly thickens, there are some interesting turns of events, and Tia starts to realize the person that she is allowing herself to become. I'm glad that I stuck it out that long, since reading the last third of the book was enough to make up for the slow first part. Suddenly the story had it all- romance, deception, drama. I loved it!

The conclusion of Food Whore was exactly the type that I enjoy the most! Things did not end up how I expected them to, but the ending that the author came up with was even better than the version that I had in my head! It was the perfect conclusion, an honour that I bestow on very few books. It kept me on my toes and wanting more!

Despite a slow start, Food Whore emerged a winner in the end! Even though I wanted to scream at Tia throughout much of the book she ended up being quite likable and - alas- human. The conclusion was exciting, and I found myself feeling satisfied as I turned the final pages. This novel about finding oneself in a new city while following your dreams is an admirable debut by author Jessica Tom.

My thanks to TLC Book Tours for inviting me along on this tour!