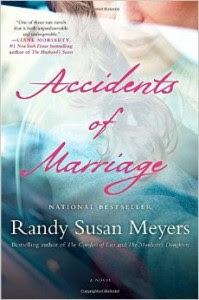 Maddy and Ben have been married for many years, and they love each other in so many ways, but Maddy is beginning to feel the strain of being married to a man who is a quick to anger and who has a volatile temper. Despite the fact that they both have full-time and demanding careers it is Maddy who has to balance the children's needs, family emergencies, and the running of a household along with her day job. Often it seems as if Maddy were to drop the ball one time, everything would come crashing down around them.

It's not just Maddy who is affected by Ben's temper. Their three children have been witnesses to Ben's sudden fits of rage, and they are reacting to it. Their teenaged daughter Emma is spiraling increasingly out of control and their two younger children remain mystified and confused by their dad's outbursts.

After one particularly frustrating day, Ben rages out of control while driving with Maddy on rain-slick roads. Despite her repeated attempts to get him to slow down, Ben loses control and Maddy ends up in the hospital fighting for her life. Even if she makes it, will she be strong enough to piece together the fragments of her shattered life?

I had a "bookover" (book hangover) after finishing this one, and it lasted for days. Every book that I picked up and attempted to read paled in comparison to what I had just read. Accidents of Marriage spoke to me, moved me, and it will stay with me for quite some time. There was something about this book that really resonated with me. It was a powerful story of one marriage that was held together by a thread, and when that delicate thread snapped everything fell apart.

I admired Maddy so much. Attempting to do what was best for her children and her family she never gave up fighting, even before her accident. She tried to do what she could to be a good mom and a good wife and a good social worker. After the accident she is faced with some tough decisions, and she holds her ground with grace and dignity. I love that Meyers did not take the easy way out and wrap up the ending up in a neat bow. She left it open to interpretation and I think that was the best way that it could have ended. I liked imagining what could happen in Maddy's future.

Meyers tackles the difficult and often overlooked issue of emotional abuse in a way that is easily relatable to people in all different kinds of domestic situations. Accidents of Marriage isn't just for one type of person, but should be read by women everywhere. I, for one, am so glad that I had the opportunity to read it. It spoke to me, it taught me something, and it opened my eyes. Thank-you to TLC Book Tours for inviting me along on this tour.