"The Best of Enemies" by Jen Lancaster 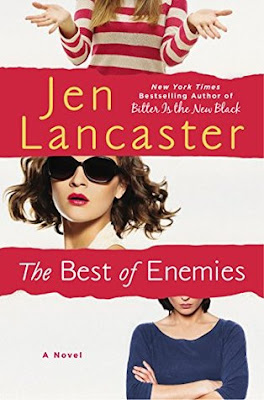 Jacqueline "Jack" Jordan and Kitty Carricoe had the potential once to be best friends. Roommates in College they were opposites, but they seemed to balance one another out in the ways that mattered. When Kitty told Jack something that was hard for her to hear, and even harder for her to admit to, their friendship disinigrated into a series of petty pranks designed to hurt the other person as much as possible. Now adults, Jack and Kitty couldn't be more opposite. Kitty is the loving wife to a dentist and the mother to three children, and Jack is a journalist at the front line of danger. The only thing that they have in common is their friendship with Sarabeth Chandler, and she is the only person who can bring them together.

The two women are forced together when they receive word that Sarabeth's husband Trip has perished in a horrible plane crash. Both Jack and Kitty find the crash suspicious, especially now that the news has broken that Trip has "lost" billions of dollars. Kitty and Jack reluctantly embark on a bizarre road trip that will either save the day or kill them both.

I'm a huge Jen Lancaster fangirl and I eagerly read everything that she writes. I have to say, though, that The Best of Enemies was my favourite fictional release of hers to date! Her memoirs have a chatty, fun, hilarious vibe but with her last two fictional releases I felt that Lancaster was finding her fictional author's voice. I'm happy to say that she has definitely found it! Lancaster's fictional writing voice has sharpened and matured and The Best of Enemies was an enjoyable, fast-paced read!

I enjoyed the character development the most. When we begin reading the book we are given an initial impression of both Kitty and Jack. Kitty comes off as being sheltered and shallow, while Jack comes across as being pretentious. I didn't particularly care for either character at first, but as I got to know them both while reading the book I liked them each more and more. Lancaster does a spectacular job of peeling back the layers of each character to reveal who they really are. We, as readers, can't help but like what we find.

The mysterious aspect of the book was new to Lancaster as well, and I can say that I thought that she did a great job! Although you could still predict the twists and turns I thought that the way that the book was laid out was really fun and it made me eager to read on. I enjoyed that the book wasn't all about just one thing, but it covered several different topics, including fidelity, child abandonment, parenting and finding ones place in life.

I loved The Best of Enemies and I just can't recommend it enough. Lancaster's voice is fresh and interesting, and I truly can't wait to see what she will come up with next. If this book is any indication of what's in store then we are in for a treat! My thanks to the publisher for providing me with this review copy.
Posted by The Book Chick at 8:58 AM