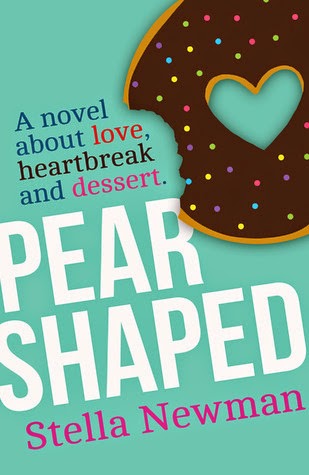 Sophie Klein walks into a bar one night and she meets a man who is about to change her life- James Stephens. He's charismatic and a bit of an enigma. He likes to eat and drink and have a nap afterwards. He enjoys wild bouts of lovemaking followed by more relaxed cuddling. He's the man of Sophie's dreams- or is he?

His stunning ex-model girlfriend casts a shadow over their relationship. As someone who enjoys indulging every once in a while Sophie feels like she can't live up to his ex. And after a while, James begins to eye up the competition and it is the beginning of the end.

A novel about love, loss, heartbreak and food, Pear Shaped is an often insightful, sometimes sad, look into the life of a girl who truly enjoys her food and everything that comes with it.

I usually love books about women who struggle with their self-esteem and their weight because it is something that I have struggled with my whole life and I can relate to it on a personal level. I have read countless books about women who are overweight and manage to come to terms with it in some way. I was expecting a lot when I picked up a copy of Pear Shaped. I was hoping for a bit of feel-good chick lit (my favourite!) but unfortunately I liked this book far less than I thought that I would.

Let me start with the good things about this book, of which there are plenty! Pear Shaped is really well-written and it's very readable. I read it, almost in its entirety, on an international flight to Denmark. Sophie was a sweet and vulnerable and very likable character in my opinion, and I wanted so badly for her to find her happy ending. I enjoyed the appearance of her mentor, a wise and entirely likable woman. Sophie's job and co-workers were interesting, as were her descriptions of food, and I especially liked the character of Will, a man who worked for a supplier for Sophie's job.

Now on to what I didn't like. What I didn't like could essentially be summed up in one word- James. There was not one part of him that I liked or cheered for. He was essentially building up his own self-esteem by constantly putting Sophie down, and I'm not sure why she put up with it as long as she did. From the sounds of things, Sophie was quite a catch- funny and independent and beautifully curvy, and James was described as being middle-aged and a little paunchy, not to mention overly critical and too mysterious for my liking (who takes off for weeks at a time without contacting his girlfriend even once?). Yet she continues to put up with him long past his expiry date. Why? Because she doesn't feel she can do better? I'm not sure, but there were much better options just in front of her and it was frustrating that she didn't even see them.

I ended up with mixed feelings about Pear Shaped. On one hand I liked the subject matter (for the most part) and I enjoyed the writing and I liked some of the characters. On the other hand I wondered when being a curvier woman became synonymous for settling for a man who isn't remotely good enough for you. The book was interesting, for sure, and perhaps it portrayed a slightly grittier version of this story that I'm used to, but as a whole it just didn't work for me. That being said, it hasn't scared me away in the slightest from reading this author's other offerings. In fact I have Leftovers in my TBR pile right now! My thanks to Bookouture and Netgalley for providing me with a review copy of this book.
Posted by The Book Chick at 5:00 AM