"Bad Will Hunting" by Heather Wardell 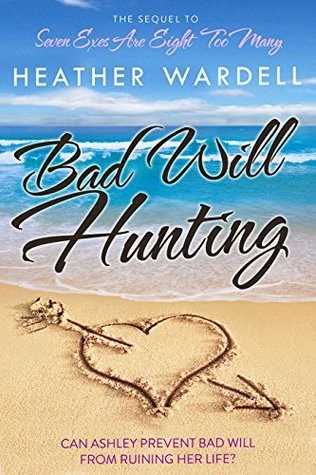 Ashley can't believe how the producers of the show Ragged Royalty duped her. They made her miss her closest friend and cousins funeral under the guise that she would be on the show Stranded! in his honour, and when she finds out that she's been tricked and instead is being stranded on an island with her ex-boyfriend and a few of his other exes, she is furious and determined to get her revenge. Revenge comes in the form of Will Smith, a sexy attorney that she meets on the plane home, who tells Ashley that she should sue the producers of Ragged Royalty and make them pay.

When Ashley discovers that Will is a fraud, her anger is incensed even more and revenge remains foremost on her mind. She knows that she needs to find Will and make him pay for humiliating her in front of the Ragged Royalty producers and that she won't be able to rest until she does so. She also knows that in order to put this whole ordeal behind her she doesn't want to see anyone from the show ever again. That's why she is surprised when MC and Kent make it a point to start inviting her to their parties and gatherings, and she's even more surprised when they invite her to do a reading at their wedding. Why are these people even bothering with "Angry Ashley"? She's even more surprised when Sam, a fellow contestant on the show, starts spending time with her and helping her with her dream of starting her own hair braiding video business. Why would someone as nice as Sam want to spend time with someone like her?

Despite the new people and experiences that come into her life Ashley finds it impossible to move past her plans for revenge for those who have hurt her. With so much negativity in her life will Ashley be able to find happiness?

I have mixed feelings about Bad Will Hunting. On one hand, it was everything that I have come to expect from Heather Wardell. The writing was spot-on, as usual, and the plot was unique and it drew me in. I really enjoyed the fact that this is a sequel to Seven Exes Are Eight Too Many, one of my favourite books by this author. The cast of supporting characters were great, and I especially liked the development of Sam's character, someone who we did not get to know well in the previous book.

What I didn't like about Bad Will Hunting was Ashley. This is the tricky part for me. On one hand I know that Ashley being angry and unlikable was a key plot point, and the book would not have been the same without it. On the other hand I really, really did not like her. I understood that life has not been kind to her up to this point. Abandoned by her parents at a young age, raised by her cantankerous grandparents, losing her best friend and cousin suddenly- all of these things are bound to make a person miserable. But to me Ashley seemed to have given up on life. She refused to better herself in life because she was worried that she could fail, or that by bettering herself she would be opening herself up to being hurt in some way. I found her to be whiny and angry and fixated on revenge, and therefore she was not a very pleasant person to read about. I didn't root for her throughout the book because of her "woe is me" attitude, and I even thought that the sweet and patient Sam was far too good for someone like her. She just refused to try to make the best of her life for so much of the book.

What turned the story around for me was the ending. It was during the final quarter of the book that I came to like her, and I'm glad that I did because the conclusion saved the book for me. Ashley finally started becoming a likable person and I like how those changes in her personality changed the tone of the book.

Even though Bad Will Hunting is the sequel to Seven Exes Are Eight Too Many, it isn't necessary to read the one to enjoy the other, though that will certainly enhance your reading experience. I was especially excited at the end to read that there will be a sequel to the book that starts where this one leaves off, although this time the focus will be on the vivacious Summer. Despite the fact that Ashley was by far not my favourite person to read about, I can definitely recommend Bad Will Hunting. Heather's writing style and the fabulous conclusion will get you past the fact that Ashley is not the most sympathetic of characters for most of the book. My thanks to the author for providing me with a review copy of this book.
Posted by The Book Chick at 5:00 AM