Review: "A Second Bite At The Apple" by Dana Bate 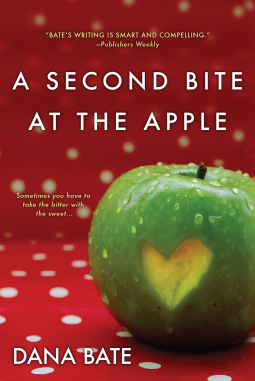 Sydney Strauss is obsessed with writing about food. When she was in College she dreamed of being a food writer one day, but since that line of work is notoriously hard to break in to she found herself accepting a producing job for a local morning show instead. When she finds herself unexpectedly unemployed in a difficult job market Sydney takes a part-time job at a local farmer's market working for a cantankerous boss at the Wild Yeast Bakery stand. While she mostly enjoys it she also finds herself gravitating towards writing about food again. Is there room for another food writer in an overcrowded market? When she lands the scoop of the century should she write about it and potentially alienate her new friends or should the world know the truth?

Add in an ex-boyfriend, a current love interest with a checkered past, a colourful best friend and a potential dream job and Sydney has her hands fuller than she ever imagined.

I liked A Second Bite At The Apple quite a bit. The farmer's market setting was really interesting, as was the emphasis on the local food movement. Author Dana Bate made the romance between Sydney and potential love interest Jeremy come alive and I quite enjoyed watching their relationship develop. Despite my reservations about the two at first, they quickly became my favourite part of the story.

I will admit that it took me a bit to get in to this book. Sydney didn't strike me as being particularly lovable at first and it took me a while to relate to her. While I enjoyed all of the quirky supporting characters I didn't like her as much as I wanted to. When she made a very questionable decision (or at least went about making it in a very questionable way) I liked her even less but persevered in reading the story anyways. It's very rare that I give up reading a book, especially when I'm more than halfway through!

Despite my earlier reservations, I'm very glad that I finished reading the book. It concluded with a bang and I found the last half very enjoyable! Sydney came full circle for me and went from a character that I felt indifferent about to one whose story I enjoyed very much! I found parts of the book to be very realistic and I appreciated that as well. Sydney's struggles with the job market felt real and lent an authentic air to the story.

Overall A Second Bite At The Apple was an enjoyable read. If you enjoy "foodie" books as much as I do it is unlikely that you won't find something to love! My thanks to the publisher as well as Netgalley for providing me with a review copy of the book.
Posted by The Book Chick at 5:00 AM