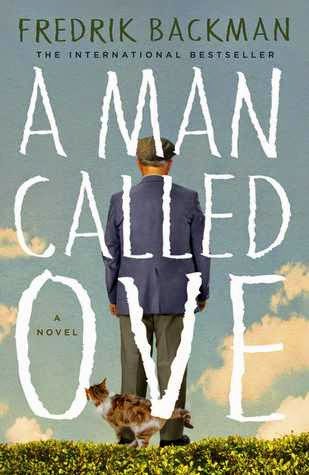 Meet Ove. He's a grumpy 59-year-old, widowed and recently retired against his will. He misses his wife Sonja more than anyone will ever understand, and he's tired of living without her so he begins planning to take his own life so that they can be reunited. When a young family moves in next door, it throws a knife in Ove's carefully constructed plans. Heavily pregnant Parvaneh, husband Patrick and their two young daughters are friendly and strong-willed and are not about to leave Ove to die in peace despite his repeated attempts. Suddenly the new neighbors need their trailer reversed, despite the sign prohibiting motorized vehicles, and when Patrick falls off of a ladder they need rides to the hospital. Meanwhile Ove's best friend has dementia and is about to be moved to a nursing home against his will and he needs someone to protect him, and an ugly stray neighborhood cat needs a home. Apparently his suicide plans will just have to wait.

I loved the Disney movie Up. It tells one of the most beautiful love stories that I have ever heard of and I've watched it (and teared up while doing so!) countless times. Ove absolutely reminds me of the main character from Up, Carl. Both men are grumpy and just want to be left alone. Both men have spent their lives in love with one woman, and both have had her taken away. Both men have bigger hearts beating inside them then they would ever care to admit to.

It was easy to love A Man Called Ove. This book truly had it all- a love story to rival all love stories, a main character that I couldn't help but love despite his prickly exterior, an abundance of laughs, and an equal amount of tears. It comes as no surprise to me that this book was a bestseller in Sweden and is now being released in other counties. I love how we meet Ove, who is grumpy and set in his ways, and then his background and past experiences are slowly revealed to us. As layer after layer of his personality is revealed we begin to love Ove even more than we initially thought possible! This is not a man who is grumpy for the sake of it, but a man who has been through so much and who is from a generation of men who puts our current generation to shame. He believes that the world is black and white, and he firmly believes in right and wrong.

I found myself laughing out loud and tearing up in equal measures while reading A Man Called Ove. It truly tells a magnificent love story and this book is definitely one of my favourites of 2014 (currently joined by After I Do by Taylor Jenkins Reid and Never Google Heartbreak by Emma Garcia). If there was a way for me to make everyone read this book I would absolutely do it, but for now I will settle for singing its praises here. If you have the opportunity to read A Man Called Ove I urge you to do it, and I know that you won't regret it. My thanks to the publisher and NetGalley for providing me with a review copy of this book.
Posted by The Book Chick at 5:00 AM