Review: "One Plus One" by Jojo Moyes 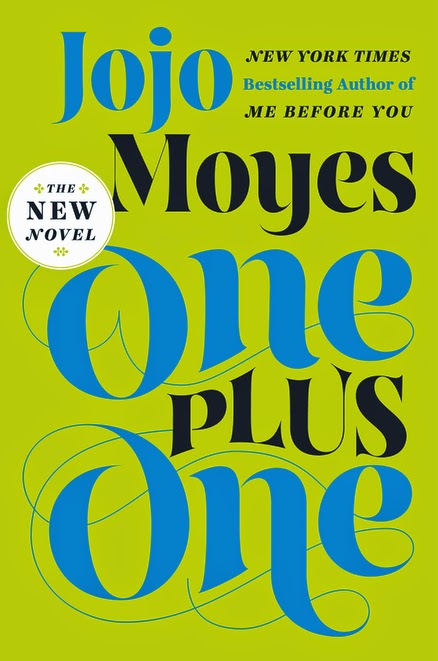 Jess is an eternal optimist but her life sucks- a lot. Her husband has done a disappearing act, leaving her responsible for supporting her daughter and stepson by herself. Her job as a cleaning woman doesn't come close to paying the bills so she has to decide which overdue bill to pay first. Her teenage stepson is being bullied because he isn't exactly like the other guys at school and her daughter is very intelligent but Jess can't afford the school fees to send her to the private school that could nurture her natural intelligence. But Jess isn't beaten yet! She maintains the cheerful optimism that she needs to get her through the day intact and she's sure that the best is yet to come.

Nerdy Ed, who happens to be a client of Jess's, has never been so down in the dumps. One stupid move on his part has completely unravelled his near-perfect life. His dad is dying but he is too embarrassed to go home and admit how badly he's screwed things up. When the opportunity arises for Ed to do something unselfish for once in his life and drive Jess and her quirky family across the country to a math Olympiad that could change their lives he does it, for reasons unknown to even himself. As the mismatched foursome make their way across the country with a smelly dog in tow they will discover that sometimes when things seem to be at their worst, they are actually at their best.

I loved, loved, loved One Plus One! Jojo Moyes now has a lifelong fan in me. I had heard how much people have loved Me Before You, but despite the fact that I have purchased a copy previously I have yet to read it. I will be rectifying that immediately! One Plus One had it all- characters that I adored and who were so well developed that they came to life on the page for me. While all of the characters were great Jess was definitely my favourite. I tend to be an optimist myself and Jess's positivity was refreshing, despite the fact that she didn't really have much to be positive about! Every character in this book was quirky and a lot of fun, and despite their differences the fact that they really cared about one another shone through.

At first we're not quite sure how the journey to the Math Olympiad will go. Ed isn't quite sure why he agreed to drive these strangers across the country, Jess is proud and she hates feeling like she owes anyone anything, the kids alternate between being carsick and unhappy to be there, the dog smells far worse than he should, but as the journey unfolds and the hours in the car together connect them to one another we see that this journey is one of the best things that could have happened to all of them. The car ride itself was disastrous and hilarious and revealing and touching.

One Plus One didn't end how I thought that it would at first, and I'm glad that it didn't. I thought that one thing would happen, and the next thing I knew I was thrown for a loop! It made the story that much more entertaining and I'm so glad that Moyes chose to end things how she did.

As I mentioned earlier I am now officially a fan of Moyes and her books. One Plus One is incredibly well written with interesting characters, unexpected plot twists, and touching moments and I can't wait to go through her back list and read all of her previous books! My thanks to the publisher and NetGalley for providing me with a copy for review.
Posted by The Book Chick at 5:00 AM