Review: "Desperately Ever After" by Laura Kenyon 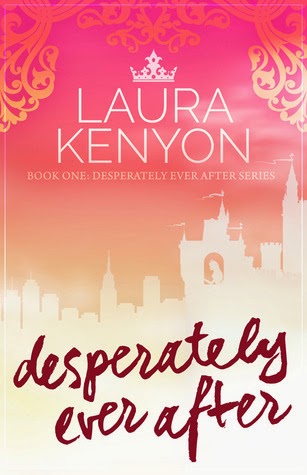 Have you ever wondered what happened to our favourite fairy tale characters after their "happily ever afters"? What happened to Beauty after Beast morphs into his handsome princely self? What happened to Rapunzel after she was rescued from her tower? What about Cinderella? Author Laura Kenyon brings these characters and more to life in the first book of her "Desperately Ever After" series, the aptly titled Desperately Ever After. She skillfully brings these characters into the modern day and she continues their stories from where the fairy tale left off. Belle is struggling with her overwhelming desire to have a baby but not being able to get pregnant. It doesn't help that her husbands infidelities are all over the gossip rags. Cinderella adores her husband and her children but can't help but wonder if she missed out on all the things she wanted to do before she turned 30 by getting pregnant on her honeymoon. Rapunzel is determined to make up for all of the years that she lost being trapped in the tower by partying and dating as much as she can. As these women navigate the often difficult task of being wives, mothers, and daughters as well as princesses in the spotlight, they lean on one another for conversation, support and friendship.

I absolutely love the concept of this series! What woman has not enjoyed a princess tale or two in childhood? I'm personally a huge fan of Beauty and the Beast and I will still occasionally watch the movie despite the fact that I'm in my 30's now. I love that Kenyon brought these characters into the modern day but kept them as princesses. Now they are princesses with royal responsibilities, less-than-perfect husbands, and modern troubles. This story was modern with an undertone of the magical! I also appreciated that Kenyon bases each character's back story on the Grimm's Fairy Tale version rather than the more widely accepted Disney version. That brought authenticity to the story.

I enjoyed getting to know some of my favourite fairy tale characters from childhood in a new and modern setting! I'll admit that at first I found it a little difficult to deal with the fact that their "happily ever afters" weren't exactly how I imagined (as in, they weren't very happy, LOL!) but I quickly got over that and became immersed in the drama of their various stories! There were parts of the story that felt slow to me, but that's likely because in the first book there are quite a few characters to introduce to the reader, and Kenyon spends time describing their unique kingdoms. If you're reading the book and come to a part that feels slow moving I encourage you to continue reading! The pace picks up shortly after and I think that future books, with less back story to explain, won't have that problem.

Desperately Ever After has a clever, whip- smart plot, an enchanting setting, and a lot of fun, strong female characters to root for. I thoroughly enjoyed reading it (on the beach!) and I'm looking forward to reading the sequel to this book, Damsels in Distress, which will be released in the summer of 2014.
Posted by The Book Chick at 5:00 AM