Review and Giveaway: "Cure For the Common Breakup" by Beth Kendrick 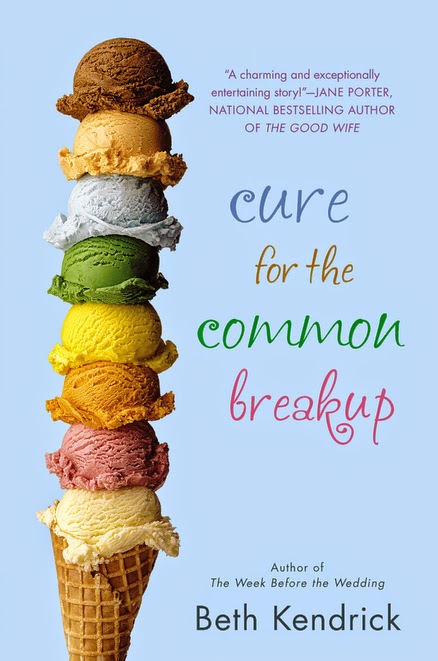 Summer Benson is a take-no-nonsense flight attendant who has dealt with her fair share of difficult situations, and every time she walks away triumphant. She's made sure that her personal life follows a similar pattern- never let someone get close enough to hurt her. When Summer hears that boyfriend Aaron is planning to propose she is shocked, but not in a good way. Summer doesn't "do" attachments. Even more shocking is when Aaron confesses to her that he loves her, but that he doesn't love her enough. Summer retreats to Black Dog Bay, a little town famous for helping women (and a few men) get over heartbreak, to lick her wounds.


What Summer is expecting is that a few drinks at the local wine bar, The Whinery, and some retail therapy will bring her back to feeling like herself again and she will be able to return to her previous life as good as new. What she is not expecting is that the residents of Black Dog Bay will find their way into her heart and that she may even begin thinking of it as home. She is most definitely not expecting to meet her match in local bully Hattie Huntington and a potential love interest in local mayor Dutch Jansen- if she can get him to agree to go out with her.

As Summer tries her new life on for size she is faced with a daunting decision and no matter what her decision it will be a difficult one that will change things in Black Dog Bay permanently.

I'll admit that I initially found the town of Black Dog Bay too "cutesy" for my taste. Every store in a certain section of town is geared towards helping women get over their breakups, and they are all named accordingly. There is "The Whinery", a pink-themed bar that plays breakup songs and serves a drink called "The Cure for the Common Breakup". There is the "Better Off Bed and Breakfast" that serves as a temporary home for the broken-hearted. There's even a clothing store named "Retail Therapy". I honestly had my doubts that I could enjoy Cure for the Common Breakup, however as the little town of Black Dog Bay worked to win Summer over it honestly won me over as well. The real stars here were not the stores but the people behind the counters. The characters leapt off of the page and the women that we met could easily be women that you would find yourself hanging out with after a long day.

My unexpected favourite quickly became not our main character Summer but gawky and whip-smart teenager Ingrid, who happens to be the sister of Dutch Jansen, town mayor and Summer's love interest. Ingrid is innocent yet wise beyond her years and I found myself looking forward to seeing her character develop as the story went on.

I enjoyed watching the romance between Summer and Dutch unfold as well. This is definitely a story of opposites attracting and I'm sure that I wasn't the only one rooting for the pair to find a way to make it work.

I also found the book to be surprisingly funny. There were a few parts where I actually laughed out loud as I read them. Beth Kendrick definitely has a sharp wit and a way with dialogue!

With a multitude of characters to love and enough romance and laughter to keep any chick lit fan happy, Cure for the Common Breakup will make a fun addition to your beach bag this summer!

About the author: Beth Kendrick is the author of The Week Before the Wedding, The Lucky Dog Matchmaking Service, and Nearlyweds, which was turned into a Hallmark Channel original movie. She lives in Arizona with her two rescue dogs, but she loves to vacation at the Delaware shore, where she goes to Funland, eats boardwalk fries, and wishes that the Whinery really existed. Connect with the author by visiting her website or Facebook page, or follow her on Twitter!
Posted by The Book Chick at 5:00 AM