Review: "Bridget Jones: Mad About the Boy" by Helen Fielding 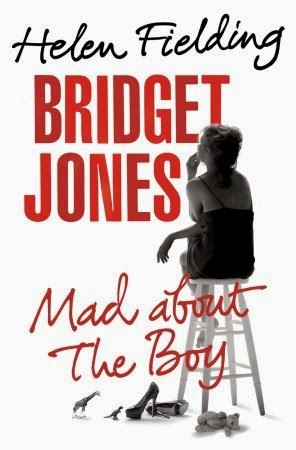 In Bridget Jones: Mad About the Boy, we find that Bridget is now a parent in her 50's. A widow and the mother of two young children, Bridget is dealing with the grief over the loss of her husband as well as her friends' insistence that she re-enter the dating scene. As she tries to navigate those tumultuous waters she encounters the baffling issues of skinny jeans, Twitter followers, wrinkles, being on time for the school run, and trying to lose the same weight that she's been battling for years. She's the same Bridget that we all know and love but she's older, even though she's not necessarily wiser!

As she navigates the dating world and single parenting, Bridget soldiers on bravely and she does it all in her signature, lovable style.

I'm aware that the release of this book brought with it a lot of controversy! Many, many loyal readers were appalled at the path that Helen Fielding chose to take with Bridget Jones, and many people wondered if there weren't different options. I chose to treat this book as a stand-alone novel. I have read and enjoyed the previous two offerings in the Bridget Jones series but as far as this one went I decided not to take the previous plots into account. As a result, I enjoyed it immensely. She's the same Bridget that we know and love, and she's as quirky and messed up and lovable as ever! The key now is that she is trying to date and parent and keep up with technology, and it often all becomes overwhelming! Sure, she's still trying to lose weight and quit smoking like she was back in her 30's, but when are we ever done self-improving? As a woman who has always struggled with her weight I'm sure it won't be something that I stop struggling with as I hit a certain age. In fact I'm sure that I will struggle even more!

I found Bridget Jones: Mad About the Boy to be a fun and lighthearted look at the life of an adorably flawed woman in her 50's. I loved the addition of young children to the story, and as a mom myself I found that I could easily relate to most of the child-related issues that Bridget dealt with. If you're not too attached to what you think should happen after the second book leaves off (and I understand if you are, it's amazing how attached we can become to certain characters and their storylines!), then I would strongly recommend that you pick up this book. It's fun and funny and entertaining and it highlights some of the more confusing things about modern life and I'm glad that I picked it up!
Posted by The Book Chick at 5:00 AM