Review: "Mama's Got a Brand New Job" by Janis Powers 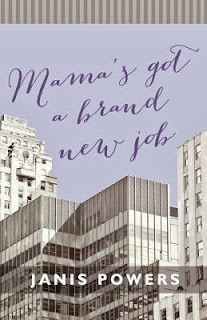 Maxine Pederson is a patent attorney who loves her job. She's recently convinced perfume giant Perfume Aix to use her firm's legal services and she's due for some serious recognition as a result. Her husband, Dale, is a successful trader on Wall Street and Maxine loves her life! When Maxine finds out that she's pregnant, both she and Dale are thrilled. They have both been wanting a baby for a while now, even if only as an abstract concept of sorts. However reality quickly sets in and Maxine discovers that there is more to being a working parent than she had originally counted on.

Mama Has a Brand New Job examines that age-old debate of can women be good mothers as well as good employees? A working mother myself, I find the debate fascinating. I always feel like I'm dropping a ball at all times- either at home, or at work- and I wonder if that perfect balance exists somewhere out there. I'm convinced that it doesn't, and that all we can do is continue to be the best parent that we can be while dedicating an equal amount of time and energy to our jobs. When Maxine finds out that she's pregnant, her own internal debate begins. When she's kicked off of the account that she helped to bring in the unfairness of the modern workplace comes into view. When Maxine is on maternity leave and she discovers just how much she loves being a parent, the debate of whether or not she can return to work and still be the mother that she wants to be is also examined. Through trial and error Maxine eventually figures out a solution that works for her.

Mama Has a Brand New Job was well-written and flowed smoothly. My only complaint was that I had a hard time relating to Maxine on some levels. She seemed so darn perfect throughout the first half of the book and that put me off of her a bit. I began to relate to her more once she had the baby and discovered the joys of exhausted new motherhood because her humanity started to show. It was at that point that I started to really enjoy the book as I felt that I had something in common with the main character.

Mama Has a Brand New Job is a must-read for any woman who has ever doubted her ability to parent while being successful. It was insightful and intelligent, and it kept me interested throughout. My thanks to the author for providing me with a copy for review.
Posted by The Book Chick at 5:00 AM