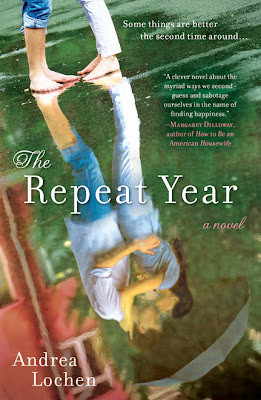 Olive Watson falls asleep on New Years Day 2012 after a long night at her job as an ICU nurse and is baffled when she wakes up in her ex-boyfriend's bed. Even more mysteriously, Phil seems to have no recollection of the fact that they broke up many months prior. Olive sorts through the facts and comes to the bizarre conclusion that she has not woken up in 2012 as originally thought but in 2011. It's New Year's Day 2011 and she is still dating Phil, her mom has not yet remarried, she lives with her old roommate in her old apartment, and she has not yet lost many of the patients that she loses in 2011. For some reason Olive is living 2011 all over again.

An experienced repeater herself, Olive's mother's bizarre friend Sherry Witan figures out that Olive is living through a repeat year and offers her as much guidance and advice as she can. Sherry has lived through several years more than once and tells Olive that she needs to figure out why she is living a repeat year and must attempt to correct her past mistakes. Olive decides initially that she has been given a second chance to save her relationship with Phil but quickly determines that her second attempt at 2011 could give her the opportunity to change other people's lives as well. As she navigates through 2011 again Olive must decide what in her life is really important and worth holding on to and what is less important than she once believed.

I thoroughly enjoyed this charming novel about one woman's second chance to hold on to the relationships that are the most significant to her. The concept of being able to go back in time and repeat a year is unrealistic, certainly, but the idea is one that I'm sure we have all wondered about at one time or another. Wouldn't it be great if we were able to take a particularly horrible year filled with bad decisions and live it again, only this time we made better decisions and things turned out differently? What I found incredibly interesting about The Repeat Year is that Olive's new decisions are not without consequences. When she makes decisions in her repeat year that vary from her original decision things do not turn out perfectly. It isn't a chance for her to do things perfectly, but an opportunity for her to make better choices.

The Repeat Year manages to be both entertaining and thought-provoking, and it provided me with many interesting insights into our various types of relationships and how they function. This is author Andrea Lochen's debut novel and since I enjoyed this one so much I am already looking forward to her future releases.
Posted by The Book Chick at 5:00 AM