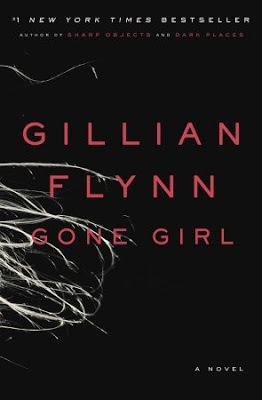 Please join me in welcoming Melissa Amster from Chick Lit Central to The Book Chick today! Melissa and I have become friends over the past few years. Even though we have yet to meet in person we have bonded over our mutual love of chick lit. Our opinions about certain books are often so similar that it's scary, and I can't even count how many times I have e-mailed her about a book and said "Can you believe that happened to that character?". When Melissa and I read Gone Girl by Gillian Flynn around the same time, she suggested that we visit each other's blogs for the day and share our reviews with each other's readers and I jumped at the chance! After you've read Melissa's review of Gone Girl please visit Chick Lit Central to read my opinion of the book and make sure that you follow their blog while you're there! Melissa and her crew are always hosting amazing contests and featuring a variety of authors and new books to discover!

The idea of anyone in my family disappearing without a trace is so unsettling and I would be absolutely devastated.


Nick Dunne, on the other hand, is as cool as a cucumber when his wife, Amy, disappears on their five year anniversary. This, along with some damning evidence, leads people to believe that he is guilty of her disappearance and potential murder. After all, his alibi isn't airtight, he looks scary when he smiles and his wife's diary makes him sound even worse. Will he be able to clear his name or will the consequences of his wife's disappearance forever haunt him?
Non-spoiler portion of the review:
Gone Girl was very intriguing and well-written. It's one of those books that I obsess over long after I've finished it. Little things will remind me of different parts of the book and various lines and moments will stick out in my head. The characters are so diverse and I enjoyed their interactions throughout. Nick definitely has a few crackpots to deal with, such as Sheena and her Frito pie or all the dangerous folk who spend their time in an abandoned shopping mall. Amy's parents are a piece of work too, with their psychological games being portrayed through a book series. I liked Gillian Flynn's use of description, making me feel like I was in the middle of North Carthage, Missouri. Nick's sister, Margo, a.k.a. "Go" was one of my favorite characters and I wish I had gotten to hear her side of the story, as well. The dialogue and narrative are very strong throughout, helping the story flow easily.
Although Gone Girl is a bestseller and has come highly recommended to me, I need to admit that there was a letdown factor involved. Don't get me wrong, it was quite a page turner and has stuck with me ever since I finished. I've even recommended it. However, when almost every woman I know tells me to read a book and that I'll love it, I expect to be blown away. I was not blown away and was disappointed by that. Maybe I put too high of an expectation on it or I just haven't read thrillers in so long that I forgot what they were like. It's like all the build-up I put on the movie version of Les Miserables and becoming frustrated with all the changes and some casting choices, even though I still love the story and music. Maybe if I had read Gone Girl before it reached "hype" status, I would have felt differently. There's really nothing wrong with the book and it's flawless in every way possible. It's just not something I'm raving about.
Time for spoilers though. If you haven't read this book yet, back out now, before you see something you shouldn't...
Spoiler portion of the review:
If you're still here, it's because you read it and I'm not ruining anything for you. If you're sticking around for pure curiosity, don't blame me when you can't enjoy it as much because the suspense is no longer there.
I first need to say that I don't know if I should hate Amy or totally admire her. The girl is wicked! Clever, crazy, evil....just wicked! I thought she took things way too far, but I totally wish I had her mind when it came to dealing with people I'd love to see punished in only the way she could pull it off. (Sorry, but there are people out there who need--and deserve--a dose of karma and Amy just needs to write a guide for how people can make that karma happen for them.) Funny enough, the whole time I was reading about her scheme to take Nick down, I kept thinking about the episode of The Big Bang Theory where Sheldon lies to Penny and comes up with all these ways to make the lie believable. He goes out of his way to cover his tracks and is obsessive and meticulous. He'd be a great partner in crime for Amy.
The only part that scared me was when she was cornered by Greta and Jeff and they attacked her and stole her money. After that, it was just interesting to watch the psychological warfare between Amy and Nick and to see who would come out as the winner.
I know Gone Girl was opted for film and I had casting choices going in my head throughout the entire time I was reading it. I'm sure they differ from other people's casting choices, but that's the fun of many minds reading the same story.
Amy: Amy Adams. She immediately came to mind and I even heard her voice in my head.
Nick: I sometimes thought Josh Duhamel (for his good looks) and other times thought Mark Duplass (for this creepiness that he has about him...like when Gillian was describing Nick's smile at the press conference.)
Go: Liv Tyler
Andie: Jessica Lowndes (I watch way too much 90210, but the description fit so well)
Desi: Matt Damon
Everyone else is kind of a blur, or we would just need new or rare actors/actresses to play them.
I'd love to hear your thoughts on this book, so feel free to comment below!
Melissa Amster lives in Maryland (DC Metro area) with her husband, two sons and daughter. When she's not reviewing books and interviewing authors for her book blog, Chick Lit Central, she works for a Jewish non-profit. In her spare time (what's that?!?), she likes to watch her favorite shows on TV, bake challah and desserts, and host meals and other gatherings. She's also a parent blogger for Empowering Parents. Check out her personal blog and follow her on Twitter.
Posted by The Book Chick at 5:00 AM