Review: "The Sweetness of Forgetting" by Kristen Harmel 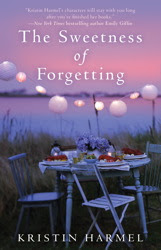 Hope McKenna-Smith is at her wit's end. At 36 she is no stranger to hardship- her husband has left her for a younger model, her daughter is a preteen with the attitude to match, her mother has died from cancer and her beloved grandmother Maime is rapidly losing her battle with Alzheimer's. To top it all off Hope has been tasked with saving her family's ailing bakery- the one that has been in the family for generations and is on the verge of being taken over by the bank.

On a surprisingly lucid day Maime adds one more thing to Hope's plate- she hands her a list with several names on it and requests that Hope travels to Paris, France to find out what happened to these people. Hope is understandably reluctant to carry out her grandmother's wishes but with the urging of Hope's daughter as well as a new friend, she sets out to uncover the mystery of her grandmother's past. As the names on the list raise more questions than they answer Hope quickly discovers that there is more to her grandmother than she once believed.

I read this on the recommendation of a friend who has very similar reading taste to mine and I am so glad that I did! The Sweetness of Forgetting is women's fiction with depth and heart and it was a pleasure to read. The story begins as Hope's story. Hope is experiencing so much turmoil in her life and she is reluctant to allow anyone to share her burdens with her. Enter the resident handyman who wants to fix Hope's heart as well as her home and we have an enjoyable story.

The real story, though, and the one that really hooked me, was the story of Maime, Hope's grandmother. This woman who initially seems so distant comes alive as her story unfolds and it was a pleasure to find out more about her history. I loved the twists and the turns that Harmel included throughout, and I was fascinated as I learned more about the plight of the people who were living in France in World War II.

My only minor complaint about the novel was that things tended to fall into place too easily. Hope travels overseas to track down the people on her grandmother's list and one coincidence after another leads her exactly where she needs to go. The ending was the same- things wrapped up into a neat package with no loose ends, which is a pet peeve of mine.

Coincidences aside, I really enjoyed The Sweetness of Forgetting. It brought to life for me a crucial part of human history and I enjoyed learning more about this time period and about other religions. My thanks to the publicist for providing me with a review copy!
Posted by The Book Chick at 5:00 AM