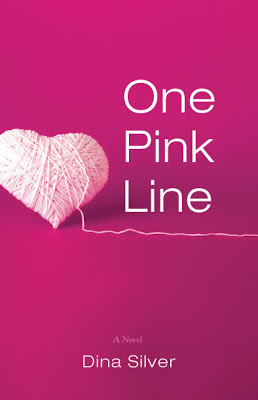 Imagine being young with your whole future ahead of you. The world's your oyster!! Anything is possible! Now imagine finding out that you are pregnant and that no matter what decision you make, you will lose the innocence of your youth. This is the dilemma faced by Sydney Shephard, a college senior with everything going for her. Her choice is clear to her- she is keeping this child regardless of the father's opinion as to what she should do, and she will raise the baby with or without him.

Fast forward several years and we meet Grace, the product of Sydney's college pregnancy. All her life Grace has felt lucky to have a mom and a dad who love her, but when a sex education class raises questions that she had never considered the answers to before, Grace must face the fact that many of the things that she believed to be true all her life have been misleading.

I instantly felt a personal connection to One Pink Line. I was a teenage mother myself (although I was only a senior in high school, not college) and I connected to many of the situations and emotions that were examined in this book. I could relate to Sydney's shock at being pregnant as well as her agony about making a decision that would change her life forever, no matter what path she chose. As a mother of a now 13-year-old I could even relate to some of the emotional situations that Sydney and Grace find themselves in later on down the road. Dina Silver portrayed so many of the emotions associated with being a young mother so well that I had to keep reminding myself that she hadn't actually experienced this situation herself and instead was inspired by the story of a friend.

Even though I could relate to the story on such a personal level, I found myself drawn to the fictional aspects of the story as well. Sydney's romance with Ethan was captivating. Their story had so many ups and downs and I felt that that boded well for their future as a couple. The conflicts between Sydney and Ethan kept the plot fresh and interesting, and it only served to enhance the unexpected pregnancy storyline.

The only complaint that I had about the book was the way that Grace found out about her true origins. That scene didn't seem realistic to me. Grace seemed like such an intelligent young girl throughout the rest of the book but that one scene made her seem younger and perhaps dumber than her years.

On the whole I loved One Pink Line. I'm not sure if it was because I could relate to so much of it, or because the romance was so endearing, or if it was some combination of the above, but I flew through the pages and I thoroughly enjoyed them all. My thanks to the author for providing me with a review copy of this book.
Posted by The Book Chick at 5:00 AM