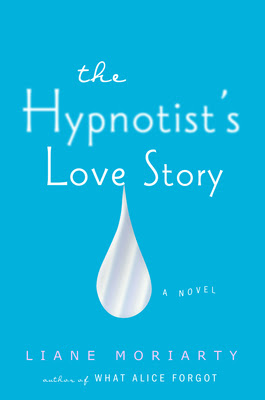 Ellen O'Farrell, a practicing hypnotherapist, is used to her solitude. Living in her deceased grandparent's home, a home that holds wonderful memories for her, she is happy. She is happier still with the addition of handsome widower Patrick and his young son to her life. By day she helps her clients deal with issues such an infertility and smoking cessation and lack of confidence, and by night she is getting to know her new boyfriend.

Before their relationship goes too far Patrick confesses that he has a stalker, an ex-girlfriend named Saskia. Instead of being upset, Ellen is intrigued by this woman. Even when she finds out that Saskia has been posing as one of her clients, Ellen remains unafraid. However as the relationship between Ellen and Patrick progresses at a rapid pace, Ellen finds herself questioning if she knows herself as well as she once thought.

I read and I really enjoyed Liane Moriarty's previous novel, What Alice Forgot. I found a lot to enjoy about The Hypnotist's Love Story as well! The writing was tight and the plot interesting. I can't recall if I have personally read a story about a female stalker before, so I found that plot point particularly interesting. Moriarty alternates between Ellen and Saskia's narrative, so we really get a glimpse into Saskia as a person, not just as a woman stalking her ex-boyfriend. Saskia and her behaviour are certainly odd, but Ellen was an odd character as well. Ellen seemed very dreamy and ethereal and while I liked her, I found little about her that I could relate to. The two characters played well off of one another- their combination of personalities just seemed to work.

I can't think of anything that didn't, in particular, work for me. I didn't get some of the specifically Australian references but that is entirely up to cultural differences rather than any fault of the author's. I suppose that my only complaint would be that I didn't particularly like Patrick, the boyfriend, so I had a hard time rooting for the relationship between Patrick and Ellen to work. I found myself hoping that they would break up at times. That being said, I don't necessarily have to like the characters in order to enjoy a book, which was the case with this one.

I'm glad that Australian author Moriarty's books have become popular in North America. I enjoy her stories and I look forward to reading more. My thanks to the publisher for providing me with a review copy.
Posted by The Book Chick at 5:00 AM