Review: "The Mystery of Mercy Close" by Marian Keyes 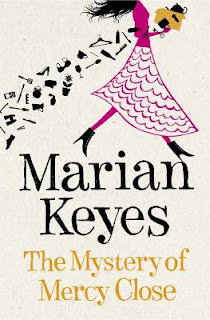 If you've been following the ups and the downs of Marian Keyes' fictional Walsh family you'll know that four out of five Walsh girls have had the chance to tell their story so far, and that the only one who hasn't is Helen.  Tah-dah! It's Helen's turn now! Helen has been going through a bit of a rough patch lately- things with her fabulous boyfriend have been a bit frantic, she's lost her home because she's been unable to pay her mortgage, and her work as a PI has all but dried up. She's feeling more than a little lost when ex-boyfriend Jay shows up and promises her scads of money if she will find Wayne Diffney, one of the members of the formerly popular boy band Laddz. Wayne has gone missing and with only days before their heavily publicized reunion concert, Jay needs him to be found, immediately. Putting aside her intense dislike for Jay Helen decides to take the job, if only to ward off the depression that she feels creeping up on her. Will Helen be able to locate Wayne in time? Will she be able to cope with the re-occurrence of her depression?

At the risk of being "booed" at by my fellow Marian Keyes fans, I prefer Marian's stand-alone novels over the Walsh family ones. I don't really know why, but perhaps it's because her book The Other Side of the Story was the first one by her that I read and I loved it so much! That being said, I thoroughly enjoyed The Mystery of Mercy Close. I enjoyed this new and grown-up version of Helen. Although some reviewers have mentioned that they preferred the Helen from the other books, this version seemed more real to me. She had demons and she was battling them on a daily basis, trying to move through everything to get to the other side. Any fan of Marian's will know that she battles depression and I appreciated that one of her characters was able to go through this as well. I like women's fiction with substance, and Keyes delivered this in spades.

Another fun aspect of The Mystery of Mercy Close was the fact that there was a mystery to solve. Perhaps I missed all of the clues but I honestly didn't know what had happened to Wayne until the end. I enjoyed trying to figure it out, and as an interesting addition there were mysteries about Helen's past that were revealed in bits and pieces as we went along.

If you're looking for a "quick" read, this isn't it (it clocks in at more than 500 pages!) but if you're looking for a great read, you've found it! When I finished this book I couldn't pick up another one right away, which is always an indication for me of how much I enjoyed it. I just felt like anything I picked up to read would pale in comparison! I was sad that this one ended, and am already looking forward to Keyes' next fictional release. My thanks to the publisher for providing me with this review copy!
Posted by The Book Chick at 7:38 AM