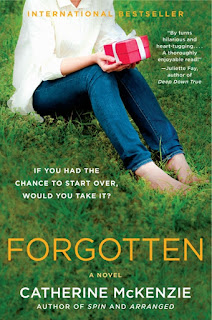 I am thrilled to be able to re-post my review of Forgotten by Catherine McKenzie on The Book Chick! The first time that I posted it was in celebration of its Canadian release, and now I am so excited that Forgotten is now available to my friends in the US! To celebrate the fact I have two copies to give away to some lucky US readers. Originally posted on April 24 of this year, here is my review of Forgotten:

Emma Tupper is a young lawyer on the fast track to becoming partner when her mother becomes ill and dies. Her mother had always dreamed of visiting Africa, but Emma is surprised when she finds out that her inheritance is a ticket to visit there. Emma is also a little annoyed, truth be told. It's not that she minds about the inheritance, because she could care less about the money, but it's the fact that she'll have to take a month off work for the trip, something that is strongly discouraged at her law firm, and Africa isn't really anywhere that Emma had ever wanted to visit. This was her mother's dream, not hers.
Still feeling the desire to connect with her late mother, Emma decides to take the trip against her better judgement. She falls ill while on the tour and is left in a remote village to heal, but just as she's recovering a massive earthquake hits and her one-month long stay turns into a six-month long one.
Returning home months after her expected return date, Emma is shocked to find out that her bank account has been frozen, her apartment re-rented, and all of her belongings disposed of. In just six short months Emma has been completely forgotten. Or has she? As Emma struggles to get her old life back she resists making the changes that those around her suggest that she make. After all, she worked so hard to get where she is, why should she have to give it all up now?

I loved Catherine McKenzie's first two books, Spin and Arranged, so it came as no surprise to me that I loved Forgotten as well. The plot was original and fresh. Despite the fact that there are so many books coming out every week, I haven't read a book with this particular plot before and I found that refreshing. The story itself was well-written and fast-paced. I hunkered down with the book one evening and before I knew it it was several hours later and I was about halfway through. McKenzie has created a likable character in Emma, a no-nonsense lawyer determined to get ahead even when the odds are not stacked in her favour. The fact that author McKenzie is a lawyer herself lent credibility to the character of Emma and to her experiences at work.

I especially enjoyed the fact that the ending wasn't really what I would have predicted. I read a lot of women's fiction and while I don't mind a predictable ending, it is the ones that are unpredictable that really stick out in my mind. I'm sure that I won't be the only reader who is a little surprised but pleased with how things ultimately turn out.

Forgotten was fresh and interesting, well-written and fast-paced. Be prepared for the fact that when you pick it up, you won't be able to put it down for a while! My thanks to HarperCollins for providing me with this review copy.

Thanks to the publisher I have two copies of Forgotten to give away to lucky US readers! To enter fill out the Rafflecopter form below. Winners will be notified by e-mail and will have 48 hours to respond.