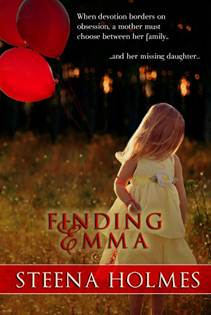 On one fateful day, in one fateful moment, Megan loses her youngest daughter Emma. Only two years old, she walks out of the front door of the home that Megan shares with her husband and three young daughters and she disappears without a trace. Two years later Emma still has not been found. The police seem no closer to finding her, no new information has been found, yet Megan refuses to give up. As the emotional distance between herself and her husband grows and as Megan begins to realize that her other daughters need her to be emotionally present in their lives, Megan must decide if she is able to let Emma go forever.

Allow me to start by saying that Finding Emma has a riveting plot. As the mother of three boys I can't imagine the devastation of losing a child. As a mom there are so many moments in a day when something could happen: one of my boys could make a fateful decision at any point and could be abducted or hurt. I could take my eyes off them for a moment or become distracted and that action could have devastating consequences. Rarely does this happen but Finding Emma examines what could happen if this nightmare came to life. I was captivated by the depth of Megan's sorrow and by her determination to find her youngest daughter. While I appreciated the complexity of Megan's situation I was able to sympathize with Megan's other two daughters as well. Not only did they have to deal with the horror of losing their sister but in a way they lost their mother as well on that day.

That being said I did have a few small issues with the book. Primarily I had a problem with the book's overall flow. I feel that the story would have benefited from an additional read-through by a fresh set of eyes. There were times that the dialogue felt choppy to me, or we went from one scene to another without warning and those things tend to bother me. I also did not like the ending. It felt too abrupt and too many important questions were left unanswered. I believe that it is the author's intention to continue the story through her website and blog and, while I appreciate that innovation, I usually prefer that a book wraps up at the end. I would have loved a few more details and the story felt woefully unfinished to me.

Finding Emma is a thought-provoking and often heart-wrenching read that left me contemplating what I would do if I were in Megan's situation. It made me think about the families of missing children everywhere, and I love the fact that proceeds from the book's Amazon sales are being donated to the Missing Children's Society of Canada. My thanks to the publicist for inviting me to review this book.
Posted by The Book Chick at 8:15 PM