Guest Post and Giveaway: "The Whirling Girl" by Barbara Lambert 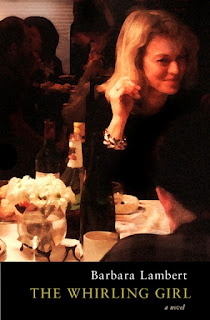 I am thrilled to welcome Barbara Lambert to The Book Chick Blog! Barbara is the author of The Whirling Girl and today she has stopped by today to share with us the inspiration for her novel as well as to give away a copy of The Whirling Girl to one lucky Canadian reader!

Clare Livingston, botanical artist, ... and Amazon explorer?
Or does the truth of her Amazon adventures really matter, if her paintings of endangered species bring more important truths to light?
Clare has managed to avoid asking herself such questions -- until, unexpectedly, she inherits her uncle’s property in Tuscany. Then more questions loom from her past.
She travels to the hill town of Cortona, fearful of the meaning of this inheritance from the man who fled his family when she was barely a teen. Yet she aches to find some trace of him.
Instead she is swept up in a world of archaeological intrigue as two men pursue her with agendas of their own; and the little lies she can’t help scattering lead her deeper along a twisting path, until even her ability to paint is threatened: the only real truth of her life.
Set against a landscape whose hills still shelter secrets from Etruscan times, The Whirling Girl explores the layered nature of desire, and asks what really are the conditions that foster art, or love -- or the telling of the earth’s long story.

Her Uncle's Ashes
A Guest Post by Barbara Lambert:


I’ve been asked more than once, “What was the start of this novel?" I suspect most writers are asked much the same thing. For me, at least, it’s surprisingly hard to pin down.

There was the moment, while I was climbing a dusty road up the slope behind Cortona, when I came upon a beautiful old tile-roofed stone house with a stone balcony, the stones so weathered and the tiles so overgrown with lichen, that the place seemed to have grown right out of the hill. And it came to me: She’s going to live there.

In truth she’d already been living with me since my very first trip to Italy a few years before, hovering on the edge of my mind, the lucky young woman who would inherit a house and olive grove in Tuscany. An intriguing set-up to ponder, though at the time I was engrossed in a different novel. And there was the question of “why she’d inherit?” And also of “who she really was?” What I knew of her was a difficult and shifty young woman who didn’t have a lot of love for herself; it was hard to imagine why anyone else would love her enough to leave her their Tuscan home.

The late afternoon light slanted on that house in a lonely way, and glittered on half-shuttered windows that seemed to enclose centuries of whispered human longing, love and guilt; and again I knew, She’s going to live there, and all of that will seep from the walls.

And I went back to Canada to finish up that other novel.

Then one night, at a party, I heard a story about a young woman, a painter, who’d inherited a legacy from an uncle, on one condition -- that she carry his ashes back to his homeland (Germany) and there dispose of them in the way she thought most fitting. But she was angry at this imposition on her ingenuity and her time, just as during his life, it seemed, she’d been angry at that uncle for other reasons. So she stretched a number of canvases, got out her acrylics, created a dozen paintings of hob-nail-booted punkish figures, mostly nude (with her uncle’s ashes mixed into the paint) then shipped them to an art fair in Berlin.

I don’t know what happened to the paintings after that.

What I do know is how that story lodged with me. Her uncle’s ashes. The idea became mine, in the way that ideas do. Her Uncle’s Ashes. For a time, indeed, that became the title of my novel. And certainly the convoluted emotions behind her inheritance -- in this case a house in Italy -- became the central thread of the story.

To my niece Chiara, with forgiveness, ran the wording of his will.

Forgiveness. Such a heavy load this could be to carry with her, along with the casket of his ashes, as she drove up that same road on the slope behind Cortona to a house whose half-shuttered windows gave off an ambivalent glitter in the setting sun.