Review: "Where We Belong" by Emily Giffin 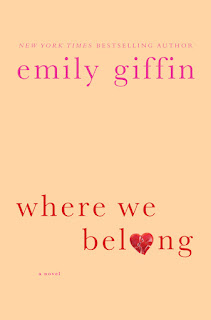 I've always loved Emily Giffin's fabulous novels, ever since Something Borrowed and Something Blue captured my heart. In fact, Something Blue remains one of those books that I'll read when I'm having a bad day- somehow the story of Darcy becoming a mother lifts my spirits and makes me forget what I was upset about in the first place. I was even lucky enough to meet Emily in person two years ago when my fabulous sister-in-law and I travelled to Toronto for a book-signing for Heart of the Matter. So I've been busy saving up the Amazon gift cards that I earn from Swagbucks so that I could pre-order Where We Belong, and luckily for me it landed in my mailbox on the day of its release.

Where We Belong tells the story of two very different women, the first being Marian, a 36-year-old TV executive with the perfect boyfriend and the perfect New York apartment. Stylish, classy, and in control at all times she is shocked and surprised when 18-year-old Kirby Rose, the daughter that she gave up for adoption all of those years ago, shows up on her doorstep. Having never told anyone, with the exception of her mother, the secret about her pregnancy Marian is faced with the consequences of her actions when she was a teenager. Suddenly she needs to deal with a host of emotions and issues that have seemed irrelevant up until this point, and Marian will need to navigate the gray area that is birth motherhood.

I really enjoyed Where We Belong, and I love the fact that it was told by dual narrators. I will admit that I connected far more with Kirby, the 18-year-old daughter, than I did with Marian. Marian seemed buttoned-up emotionally, keeping readers at a distance, while Kirby seemed more raw and genuine, and she let her emotions spill out as they came to the surface. I did love the scenes between Marian and her dad- he seemed like a very lovable and accepting man, and I also loved the interactions between Kirby and Conrad.

I honestly can say that I expected to connect with the characters more than I did, given my personal background. I became a mother at the age of 18, so even though I made a different choice than Marian and I chose to keep my son, I thought that I would relate more to Marian than I did. In addition to becoming a mother at a young age there is someone very close to me in my life that has given a child up for adoption and I expected to feel more of a connection there as well. I truly don't know if this was something to do with how closed-off Marian seemed or if it had something to do with me personally, but I just expected to feel more somehow.

I also had a few small issues with the way that Kirby came across. She is 18 in the book but often her dialogue and experiences felt like they were coming more from someone who was 16. I found myself thinking back to my own experiences as a teenager and, teenage parenthood aside, most of the things that Kirby was going through felt like they could have been happening to a much younger teenager.

Despite the fact that I had a few small criticisms, I really loved Where We Belong. It was well-written and it flowed beautifully, and the topic was interesting and relevant. Parts of the book were concluded a little too neatly, but the ending was left deliciously open-ended. I really enjoyed the fact that the story was told from two perspectives, and if I was giving this book a rating out of five stars, I would give it four without hesitation. (Please note that this book was purchased by me for my own enjoyment).
Posted by The Book Chick at 5:00 AM