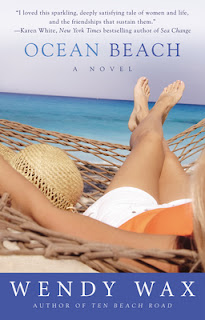 Yesterday I reviewed Wendy Wax's latest book Ocean Beach, and today I have the pleasure of welcoming her to The Book Chick Blog! She was kind enough to agree to guest post here today, plus I have one copy of Ocean Beach to give away to a lucky reader from the US or Canada! Please join me in welcoming Wendy today:

New writers are often told to “write what you know” and writers who have been at it for awhile are often accused of writing about themselves and the people they know.  But sometimes as a writer, we write about the things we wish we could do, the places we’d like to go and the people we’d like to meet.  That is certainly the case for me in my novel TEN BEACH ROAD and its just released sequel OCEAN BEACH.  While both books are stories about a group of women working together to overcome adversity, they are also both centered around home renovation, something I personally tend to admire from afar.

In fact, in my house we’re not actually allowed to own tools because we generally require medical attention if we get anywhere near them.  Sad but true.  I gave my characters Maddie, Nicole & Avery… along with Avery’s mom Deirdre and Maddie’s daughter Kyra the ability to fix things.  Or at least the ability to be able to learn to fix things.  Something I myself would rather just watch people do on television.

And speaking of television… OCEAN BEACH also includes a couple of characters I’d really love to meet and a few whom I’d be very curious about but would probably rather stay away from.  The characters I’d love to meet – and so loved creating were the owners of the house being renovated in the book, former Vaudeville star Max Golden and his lovely wife Millicent.  I always loved George Burns and his Gracie.  I admired their public personas and imagined they had a truly loving and wonderful relationship.  Max and Millie are my tribute to them and the class and style that was once an integral part of celebrity.

And then there are the celebrities of today.  In TEN BEACH ROAD, you first meet philandering Hollywood star Daniel Deranian and his foreign-child-adopting-mega-star wife Tonja Kay.  They return in OCEAN BEACH and while they’re not based on specific people in Hollywood, their behavior is in sharp contrast to the suave Max.  This happened almost accidentally as I was writing, but I have to say I’m glad it did.  Daniel and Tonja are kind of “tools” in their own right and though I probably wouldn’t want to get involved with either of them, they were great fun to write.

As for places I’d like to go… obviously for me, it’s the beach.  I live in land-locked Atlanta and I miss the beach!  So, in TEN BEACH ROAD my characters end up in Pass-a-Grille, at the southernmost tip of St. Petersburg Beach, Florida where I grew up. In OCEAN BEACH they’re working on a really cool Art Deco Streamline home in Miami’s South Beach.   Alas, I had to visit both locations for research.  Poor, poor me!

If you were writing your own series, and didn’t have to “write what you know”… would your characters stay magically thin while eating tubs of ice cream? Would they know how to handle weapons or be Olympic level athletes?  Would you send them off on safari to Africa or into another time period altogether?  Just think of all the fun “research” you could do.  It’s one of the perks of being a writer… and a reader too, of course.  You get to explore unknown worlds and handle tools like an expert without ever breaking a nail!

Wendy is currently at work on her next novel. When not writing, she spends much of her time speaking to writer’s groups and book clubs, enjoying time with her family, visiting relatives in St. Pete, and devouring books.

My thanks to Wendy for taking the time to stop by today! To enter to win a copy of Ocean Beach please enter using the Rafflecopter widget below: