Review: "The Song Remains The Same" by Allison Winn Scotch 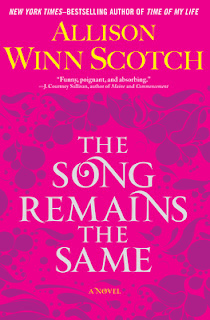 Nell Slattery wakes up in a strange hospital room and discovers that she is only one of the two survivors of a horrific plane crash. She also quickly realizes that she has no memories remaining- not of the crash, nor of the people and places that made up the fabric of her previous life.

Desperate to discover who she used to be, Nell begins to listen to music and look at pictures and art that may jog her memory, but with no result. Her family tries to help but they each have their own agendas that alter each of their stories enough that the end results just don't add up. Nell's husband, Peter, conveniently forgets to tell Nell that they are in the process of divorcing due to his recent affair. Nell's mother doesn't want to answer any difficult questions about Nell's long-lost father so she glosses over his absence. Nell's sister and business partner, Rory, doesn't want Nell to remember how volatile and fragmented their relationship is so she pretends that everything between them is just fine.

As Nell tries to recover her memory she may discover that sometimes the path to finding herself includes forgiving those who have hurt her along the way.

I can't imagine what it would be like to wake up in a hospital with my memory wiped clean, unable to recognize the people around me who claimed to be my loved ones. Allison Winn Scotch takes this frightening scenario and thoroughly examines it in The Song Remains the Same. What I especially enjoyed about how Winn Scotch chose to address the situation is that she took a unique take on it. Despite the fact that her family loves her, they don't necessarily want her to recover her memories- at least not all of them. Each of her family members, he husband, her mom, and her sister, all have their own agendas and their own ways of spinning the truth in their favour, leaving Nell unable to separate the facts from fiction. The only person who doesn't seem to have an agenda is the other person who survived the plane crash, Anderson Carroll, a famous movie star, but he remains haunted by the plane crash and the fact that he survived while so many others did not.

As Nell tries to piece her life back together I appreciated that she took the opportunity to make changes in her life. Despite the fact that she can't remember her past, she looks at pictures and listens to stories about herself and she tries to change the things that she doesn't like.

Well-written and captivating, with characters that remain with you long after you've finished reading it, The Song Remains The Same is a book that I can recommend to anyone who has ever wondered what it would be like to completely re-invent yourself.
Posted by The Book Chick at 10:49 AM